Advanced Search >
Franklin Abbot was born in 1950 in Birmingham, Alabama. He grew up in Birmingham, Buffalo, and Nashville. As a kid, Franklin marched to the beat of his own drummer, which wasn’t always well received by his buttoned-down family. But in high school, he found an outlet for at least some of his creative energy in a youth service group called the Order of DeMolay.
Coming out as gay during college, Franklin was simultaneously drawn towards the women’s and black liberation movements. The writings of Adrienne Rich and Audre Lorde opened his eyes to feminism as a force of liberation for both women and men. Franklin would ultimately publish three anthologies on men and gender: New Men, New Minds (1987), Men and Intimacy (1989), and Boyhood: Growing Up Male (1991).
After college, Franklin worked at a facility for mentally challenged adults and children, and plunged deeper into social activism. He also got his master’s degree in social work, and in 1979, he became one of Atlanta’s first openly gay professionals when he opened a private psychotherapy practice.
Also during the 1970s, Franklin’s life took an important turn when he connected with America’s radical faerie community. The radical faeries are a loose, global organization of mostly-male queer people who resist assimilation into mainstream society, focusing instead on alternate spirituality, environmentalism, and anarchism. Originally founded in California, one of the main radical faerie centers today is at Short Mountain, Tennessee. For two decades, Franklin spent extensive time at Short Mountain. He served as poetry editor for the radical faeries’ unofficial journal RFD, worked with the journal Changing Men, and also published two volumes of his own poetry. In 2008, he founded Atlanta Queer Literary Festival, and in 2017, he released an CD of original songs and poetry, Don’t Go Back to Sleep.
Today, Franklin lives in Decatur, Georgia, where he continues to practice psychotherapy, write, and make music. His home is filled with memorabilia, souvenirs and photos of the places he’s traveled, and the rich cast of people he’s known. OUTWORDS interviewed Franklin in March 2018 in the same room where he sees clients, which somehow felt just right for the stories and emotions Franklin shared of a gifted individual finding his path in the world – and seeking to make the world a better place for those following behind.
Franklin Abbott at the age of 2 with his teddy bear, 1952, Birmingham, Alabama. Franklin Abbott at the age of 7 recovering from the chicken pox, 1957, Birmingham, Alabama. Franklin Abbott reading in a poetry circle with poets Clover Chango (R) and Andrew Wicker (L) at the second National Radical Faerie Gathering, 1970, Pecos Mountains, New Mexico. Abbott writes “There were three national gatherings in consecutive years which created a national network of radical faeries.” Franklin Abbott in a group photo at the second annual Southeastern Gay and Lesbian Conference, 1977, Chapel Hill, NC. (Pictured in Back L-R) Richard Robinson, Charlie Murphy, Neil Adams, unknown, Dennis Buckland, Yogi Ferdes Settles. (Pictured in Middle L-R) Unknown, Firefly, Mikel Wilson (Pictured in Front L-R) Unknown and Franklin Abbott. Abbott writes: “The conference was important as an early meeting place for radical gay men who later became the first radical faeries. Charlie Murphy became the troubadour of the radical faeries and made several albums of his songs. Mikel Wilson's farm at Running Water became the home of the first radical faerie gatherings in the South.” Franklin Abbott at a gathering in Running Water Farm in 1979, Roan Mountain, NC. (Pictured L-R) Franklin Abbott, Willi, Ron Lambe, and Michael Wildflower. Franklin Abbott standing next Neil Adams, his lover at the time, and Raven Wolfdancer sitting in front, an artist and another member of the Gay Spirit Visions Conference, Iverson Street house, 1979, Atlanta, GA. Doodling on the photo was likely done by Raven Wolfdancer. Franklin Abbott at his home, late 1980s, Atlanta. Group photograph at first Gay Spirit Visions Conference, pictured with (L-R) John Burnside, Harry Hay, Franklin Abbott, and unknown, 1990, Highlands, NC. Abbott writes: “Harry was the founder of the Mattachine Society and he and John were among the creators of the National Radical Faerie Movement. Harry and I were keynotes at the conference along with Andrew Ramer. GSV conferences are still held at The Mountain, a retreat center on Little Scaly Mountain near Highlands, NC.” Franklin Abbott and James Broughton (R) at the 2nd Gay Spirit Visions Conference, 1991, Highlands, NC. James Broughton was not only well known filmmaker and poet and keynote for the conference but one of the elder radical faeries and was Franklin Abbott’s mentor in poetry. Group photograph: (L-R) Osiris Montenegro (dating at the time), Franklin Abbott, John Gill, and Elaine Goldman Gill, 1992, Santa Cruz, CA. The Gills were publishers of The Crossing Press, one of the first feminist presses. They published all three of Franklin Abbott’s anthologies on men and masculinity. Franklin Abbott with poet Edward Field (middle) and psychologist Gus Kaufman (right) at Gus’ home, 2008, Atlanta, GA. 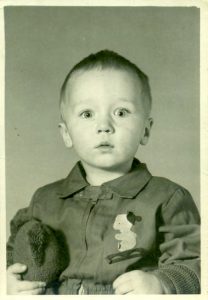 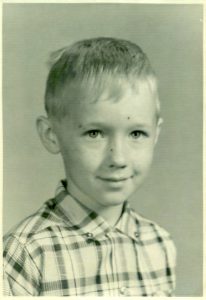 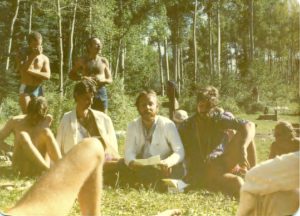 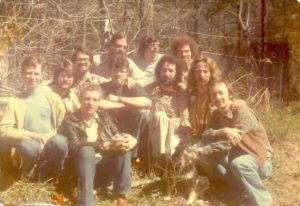 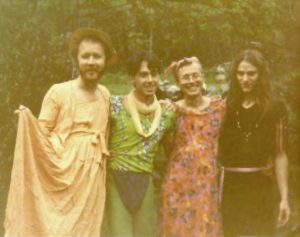 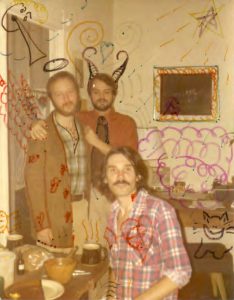 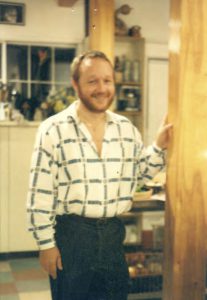 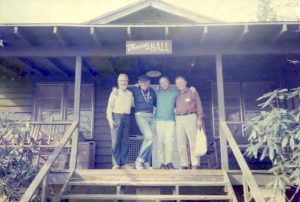 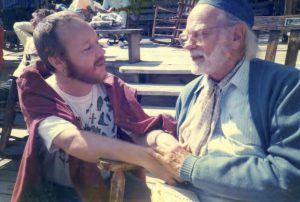 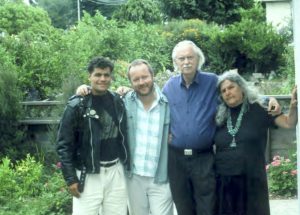 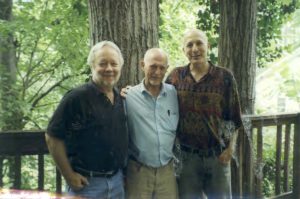