Advanced Search >
Susan Jane Allen was born in Detroit in 1948. Her parents, Leo and Helen Allen, both worked in the space industry. In 1962, the family relocated to New Orleans, where Susan’s dad worked on the project that launched America’s first astronaut. Susan went to Louisiana State University, studied ceramics, and plunged into a life of activism. She also fell in love for the first time – with her professor.
Susan’s father and her grandfather, a Russian immigrant, were both liberal Democrats, and inspired Susan to be outspoken and take political action. At LSU, she was involved in issues from international policy and war to campus policies. She protested the invasion of Cambodia invasion and participated in anti-Vietnam War demonstrations. At the same time, she peacefully fought the production of napalm at a local factory, pushed for gender equality on campus, and helped convince LSU to create the first student art galleries.
From 1970 to 1990, Susan worked off and on as a cartographer and graphics artist for oil and gas companies in the New Orleans area; but her primary energies went to women’s causes and issues. Susan served twice as the Chair for the New Orleans Women’s Festival, worked for the passage of the Equal Rights Amendment (ERA) in Louisiana, and most intensely, battled incessantly and in high-profile ways for women’s reproductive freedom. She served as Louisiana state coordinator for the National Association for the Repeal of Abortion Laws (NARAL), and later on NARAL’s national board. In response to her efforts, Susan’s life was threatened and her home was trashed.
In 1990, Susan hit a wall in her activism. Her not-very-relaxing solution was to take a job as a child protection investigator for the Louisiana Department of Social Services. Over nearly two decades in that role, Susan continued to fight for women and children, focusing especially on cases with child fatalities or near fatalities.
Today, officially retired, Susan finally has time to hang out with her two rescue cats, Petee B. and Piper Jane, and to create sculpture and stained-glass artwork which she shows weekly at the New Orleans French Market. She also participated in the Women’s Marches in New Orleans in 2017 and 2018.
OUTWORDS interviewed Susan at her brother’s home in Slidell, Louisiana in July 2017. After we’d packed up the camera, Susan mentioned the heat she took from other lesbians back in the day, because of her commitment to women’s reproductive rights. We got the camera back out – because along with our victories, it’s important to remember the queer community’s internal battles of the past. We’re still working those out today, and we’re thankful to people like Susan, who never failed to stand up for what she saw as right.
The wedding of Susan’s mother and father, with her maternal grandmother and grandfather, 1942. Susan and her sister and their first car, circa 1952. Susan and Lynette stayed at house off route 6A in Touro, MA, on Cape Cod, summer of 1967. Susan shares, “At night we worked at Aesop's Table in Wellfleet, by day got stoned, drank, cooked and talked about the reason to live, art, being creative, how to change the world and what we could contribute. I did a lot of folk singing and guitar playing in those days!” Susan in P'town aka Provincetown, MA, summer of 1967. Susan Allen, Lily Tomlin, ad Donna Yarnell in Lily’s suite after her performance in the Blue Room of the Fairmont Roosevelt Hotel, New Orleans, LA, circa 1975. Back L-R: Carlos Butler, Angela Dudley, Michael Hickerson, Robert Batson. Front: L-R: Susan Allen, unknown. Across the street from the Golden Lantern gay bar on Royal Street in New Orleans. “One of those "stop at every gay bar on the parade route so by the end of the parade your unable to walk!” Susan with Linda Lambert lobbying for ERA at the Louisiana Legislature, June 16, 1976. Photo credit: Ken Armstrong. Photo courtesy of Susan Allen. Susan with Gloria Steinem at the NARAL National Board Meeting Washington D.C. (the year she was elected to their Board of Directors), January 21, 1978. Susan and Caitlyn Jenner (pre-transition) at a NARAL Fundraiser at Hugh Hefner’s Holmby Hills Mansion, 1978. Susan Allen on the far left (with a sign reading “Mandatory Motherhood is UN-AMERICAN”) examining a banner she made for a demonstration against the Anti-Choice Conference, Metairie, LA, 1979. Susan Allen demonstrating in front of the Anti-Choice Conference with a sign reading “Mandatory Motherhood is SLAVERY,” Metairie, LA, 1979. The Gender Pac cookoff team of Art Smith, Susan Allen, and Jennifer Beals competing at Chopping Block Chicago, October 6, 2007. Susan Allen and Lily Tomlin at the HRC Gala in New Orleans during her performance, 2011. Susan shares, “she remembered me and actually stopped her performance to say hello after 35 years.” 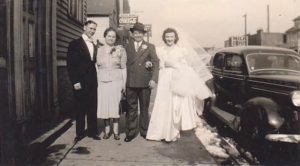 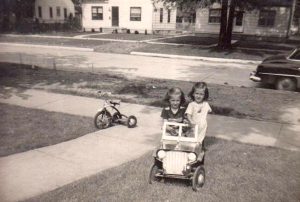 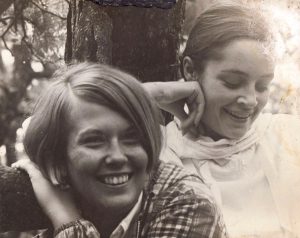 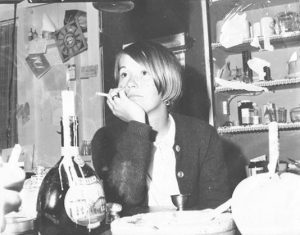 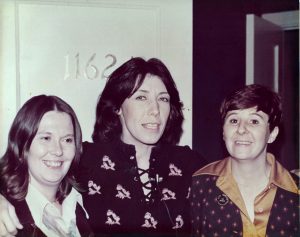 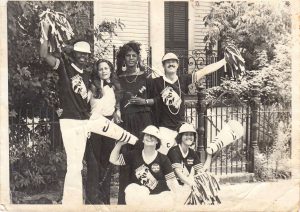 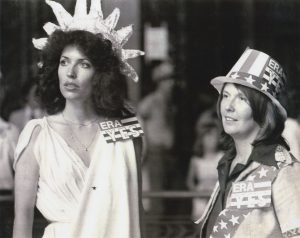 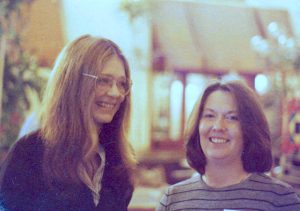 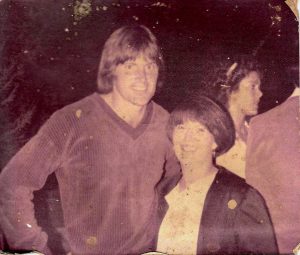 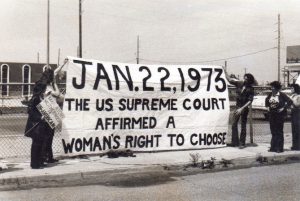 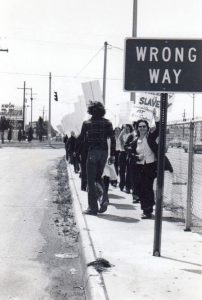 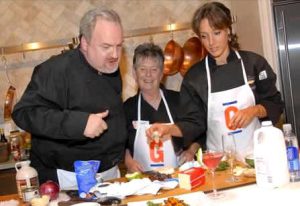 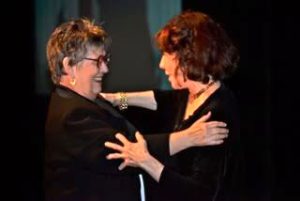