Donna Burkett was born in 1946 at Cook County Hospital in Chicago, Illinois, and moved to Milwaukee with her family at age eight. Her grandfather owned and operated Black King,Milwaukee’s first black sit-down restaurant and, by all accounts, the best barbeque joint in town.

Donna graduated high school, joined the Army, and returned to Milwaukee in 1970, whereupon she met Manonia Evans and fell in love. In 1971, the two women applied for a marriage license at the Milwaukee County Clerk’s office. Unsurprisingly, the county clerk turned them away – so Donna and Manonia filed a federal lawsuit. Although their lawsuit was ultimately unsuccessful, the argument they used – equal protection under the Constitution – was cited by U.S. District Judge Barbara Crabb more than 40 years later, when she overturned Wisconsin’s ban on same-sex marriage in 2014.

Meantime, Donna and Manonia still wanted to get married, so they invited 250 family and friends together on Christmas Day 1971 for a ceremony officiated by Joseph Feldhausen, a gay Russian Orthodox priest. The wedding was covered in the local press, and nationally in The Advocate and Jet magazine (which ran a six-page spread). The results of their newfound fame were not positive. The young couple’s friends shunned them. Donna lost her job, and Manonia got kicked out of school. Manonia’s father, a preacher, said he’d rather see his daughter dead than queer. The strain took its toll and eventually, Donna and Manonia split up.

In the years that followed, Donna worked at General Motors for over 20 years making catalytic converters. She also worked frequently as a DJ, and contributed her time and energy with Action Wisconsin, a gay rights group. In the early 2000s, she had a stroke which left her reliant on a motorized wheelchair to get around.

Among the many rewarding aspects of recording Donna’s story for OUTWORDS was the sheer joy and gratitude she expressed at being tracked down after all these years. She ended each phone call with the same words and cadence. “Bye…for now”.  Whether in this life or the next, we look forward to hanging out with warm, funny, humble Donna Burkett every chance we get.
Manonia Evans and Donna Burkett in Wisconsin in 1971. Source: Vintage Everyday (www.vintag.es). Photographer unknown. These photos by renowned photographer Isaac Sutton were originally published in JET magazine in November, 1971, with the caption: “Miss Evans readies for the traditional salutatory of lovers … and then kisses Miss Burkett.” Isaac Sutton photo of Donna and Manonia with the caption, “Enjoying the Indian Summer climate of the city, couple walks arm-in-arm through downtown Milwaukee on the way home.” Source unknown. Donna Burkett, age 68, the week she received an “everyday courage” award from the Milwaukee LGBT Community Center. Source: Milwaukee Journal Sentinel. Photographer: Angela Peterson. Donna receiving a LGBT Progress Award in 2015. Source: Shepherd Express (https://shepherdexpress.com) Photographer: Valerie Kurka 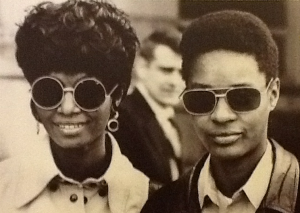 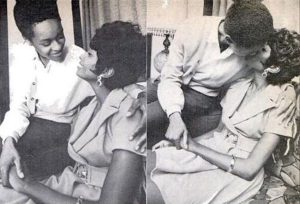 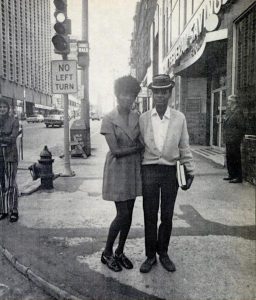 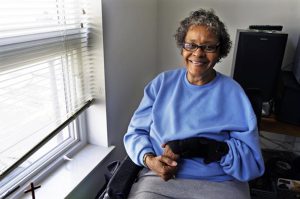 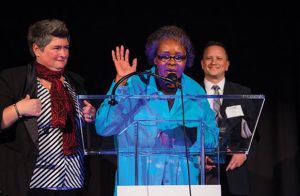