Advanced Search >
Tom Dyer was born in Lancaster, Ohio in 1955. When he was 7 or 8, Tom was discovered by his brother and father playing Barbies with his two best friends, who were girls. Deeply upset by their taunts, Tom went to his mother, who asked him whose opinion mattered more: his own, or those of his brother and dad. Tom decided his brother and dad’s opinions of him mattered most. That decision, Tom says, shaped his life for the next 20 years—and to some extent, he’s still unraveling it today.
Notwithstanding that experience, Tom has been a remarkable force for LGBTQ equality and visibility in his adopted hometown of Orlando, Florida. But it took a while to get there. In college, still far from coming out, Tom started drinking heavily. He got into law school, but soon dropped out. It took a decade for him to get sober, and to come out, at which point, Tom decided to apply for re-admission to law school. But how would he explain his ten-year absence? Eventually Tom decided to simply tell the truth about who he had been, and who he was now. To his surprise, the law school dean welcomed him back with open arms. “People can relate to the truth,” Tom now says.
But the legal profession was not Tom’s ultimate destination. In 1993, Tom heard a respected Orlando elected official say a stupidly stereotypical thing about gay people. “I love when they move into my neighborhood, they keep such nice lawns.” Tom saw the need to educate—not just this one ignoramus, but the entire Orlando / Tampa Bay community—about LGBTQ people. His answer: start a gay newspaper. The paper was called Watermark. For 20 years, while still practicing law, Tom grew Watermark from a two-person staff with $25,000 in debt into a robust, respected publication for LGBTQ issues as well as general news throughout the Orlando / Tampa Bay region. In 2014, Tom was named a “Champion of Equality” by the Harvey Milk Foundation.
Today, Tom looks back to the day when his brother and father taunted him for playing with Barbie dolls and knows that in the long run, he learned to live for himself, to experience his life, and to trust his instincts. This has steered him on the right path.
Tom Dyer and his neighbors Karen and Cinda Osness as children. Tom shares, “When I was a little boy, my two best friends were my next-door neighbors, Karen and Cinda Osness. We liked to play with their Barbie dolls until my father saw us and told my mother. She sat me down and asked what was more important: what I wanted to do or what other people thought of me. I chose the latter… a decision that defined my life for years to come.” Photo courtesy of Tom Dyer. Tom at seven-years-old in his bunk bed at Camp Hiawatha, which was owned by a Green Bay Packer and Detroit Lion. Tom shares, “For three summers I attended the month-long camp in Northern Michigan and began to develop a sense of self.” Photo courtesy of Tom Dyer. Tom in the Beta Theta Pi House at Depauw University. Tom shares, “Here I am, cutting up as a freshman. I lived in the fraternity house, made some great friends, but paid an emotional price for suppressing my sexuality.” Photo courtesy of Tom Dyer. Tom, with his parents, graduating from University of Florida’s Levin College of Law. Tom shares, “I wasn’t out, wasn’t comfortable in my own skin, and wouldn’t pursue a law career for another 15 years.” Photo courtesy of Tom Dyer. Mike Kilgore and Tom Dyer. Tom shares, “When I started Watermark in 1994, talented writers came out of the woodwork to help. Mike Kilgore contributed a regular column for years and went on to edit Celebrate! when Watermark purchased the Key West newspaper in 2002.” Photo courtesy of Tom Dyer. Gloria Steinem and Tom Dyer. Tom shares, “One of the benefits of owning an LGBTQ newspaper is assigning yourself the choice interviews. I spoke with Gloria Steinem in 2005. She was warm, generous, funny, and offered brilliant insights into the origins of homophobia.” Photo courtesy of Tom Dyer. Tom’s headshot that accompanied his “Publisher’s Perspective” column in Watermark, 2010. Tom shares, “Watermark was still growing, and the LGBTQ community was making important progress… a proud and happy time.” Photo courtesy of Tom Dyer. Tom Dyer and John Tanner in front of the Kinky Boots Broadway sign, 2013, New York City, NY. Tom shares, “Many talented Watermark contributors eventually relocated to New York City. I began making regular trips and developed a defining love of the city and Broadway theater. My friend, John Tanner, and I saw Kinky Boots in 2013.” Photo courtesy of Tom Dyer. L-R: Andy Cohen, Gina Davis, Tom Dyer, and Anderson Cooper in front of the “Anderson Cooper & Andy Cohen: Deep Talks and Shallow Tales” promotional wall, Orlando, FL. Tom shares, “After the horrific Pulse massacre in 2016, in which 49 people lost their lives at an Orlando LGBTQ nightclub, Andy Cohen and Anderson Cooper brought their show to town to lift spirits. I’m pictured here with dear friend, Gina Davis, a remarkable transgender activist.” Photo courtesy of Tom Dyer. Tom’s “Publisher’s Perspective” column in Watermark, 2010. Photo courtesy of Tom Dyer. The cover of Watermark’s 20th Anniversary issue, featuring a letter from Tom about the legacy of Watermark, September 11-14, 2014. Tom shares, “I sold Watermark three years after this 20th Anniversary Issue was published. My experience founding and publishing the newspaper was a gift, and my proudest accomplishment.” Photo courtesy of Tom Dyer. Pages from Watermark’s 20th Anniversary issue’s article “20 Amazing Years”, which discusses its legacy, September 11-14, 2014. Photo courtesy of Tom Dyer. Pages from Watermark’s 20th Anniversary issue’s article “20 Amazing Years”, which discusses its legacy, September 11-14, 2014. Photo courtesy of Tom Dyer. 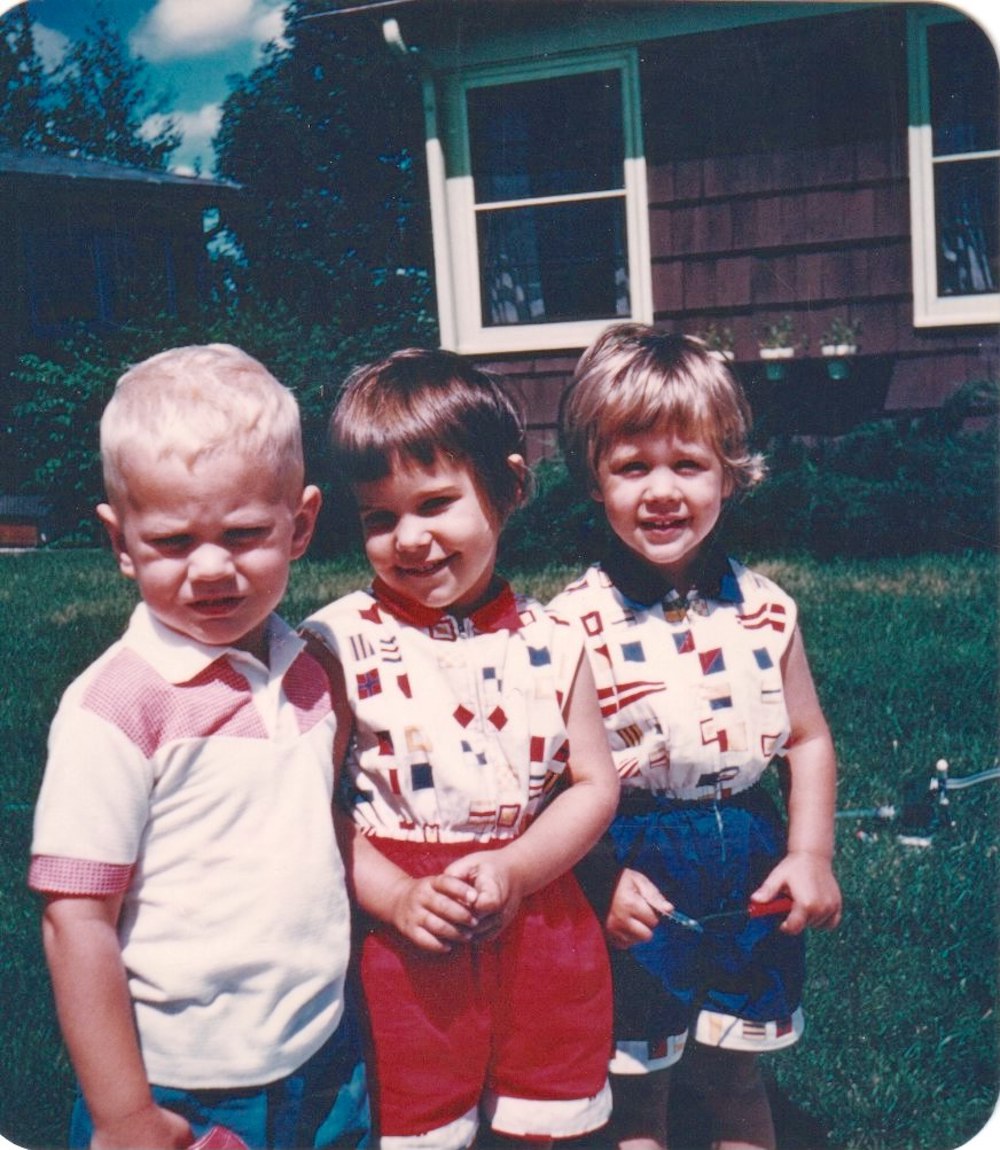 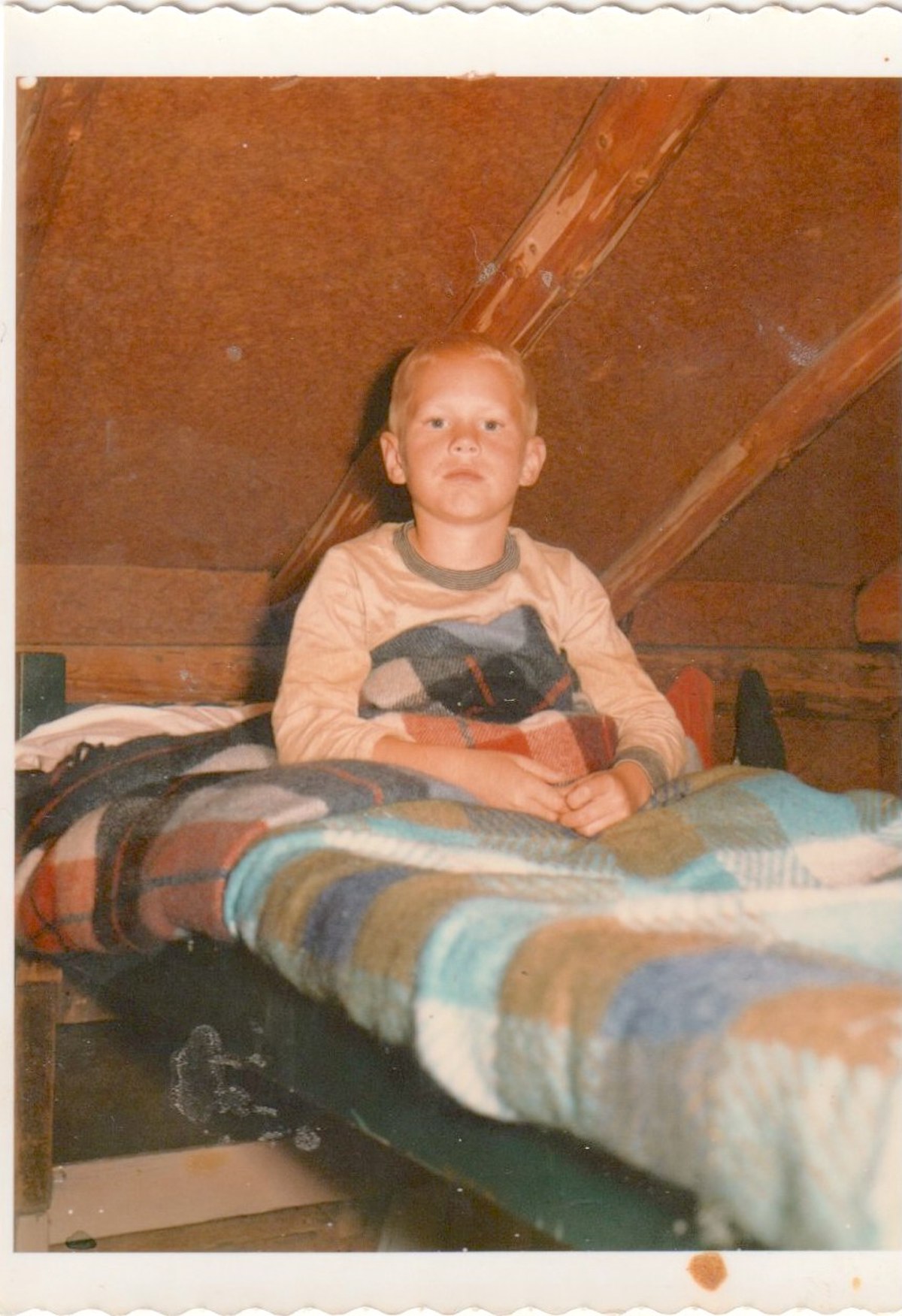 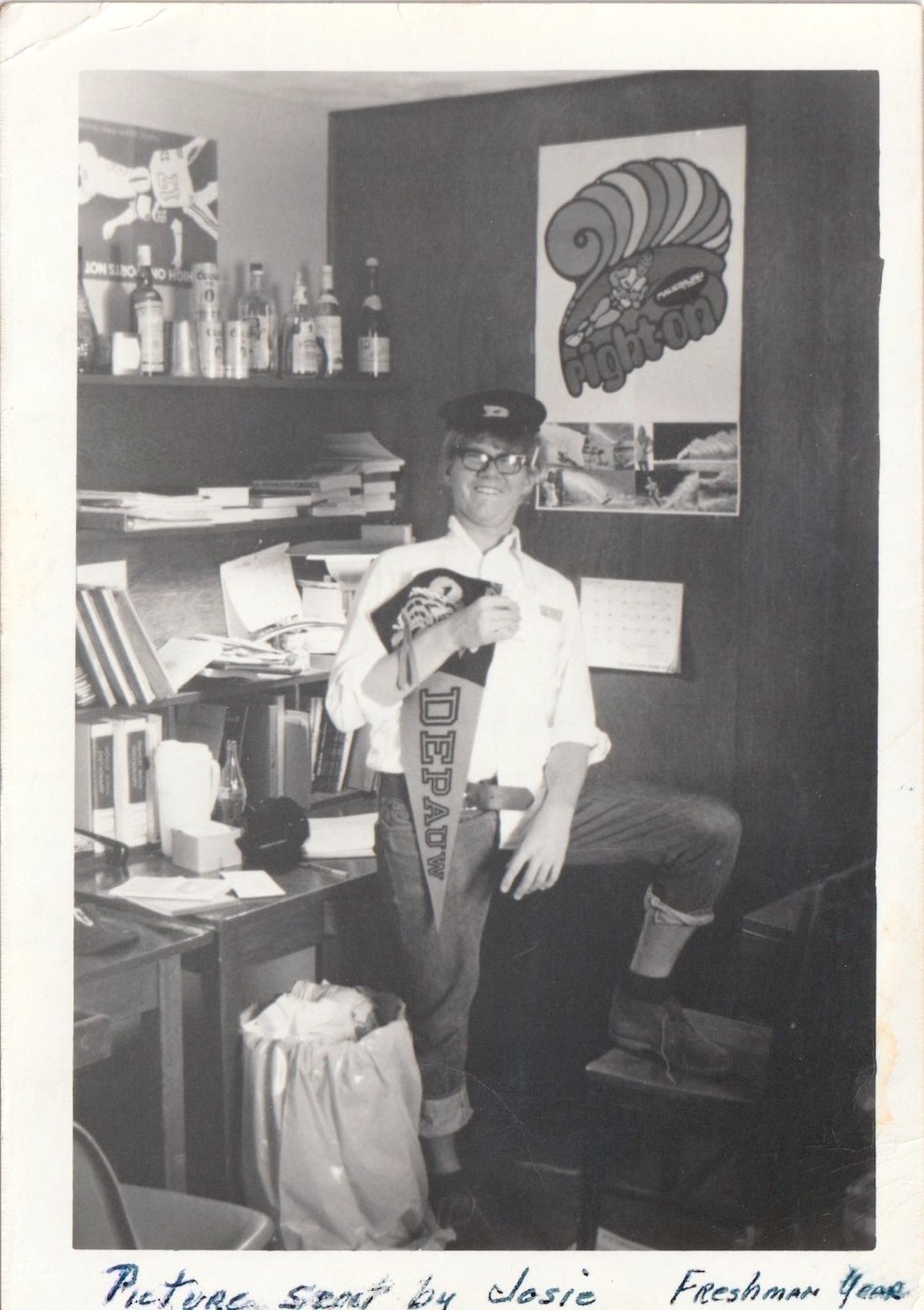 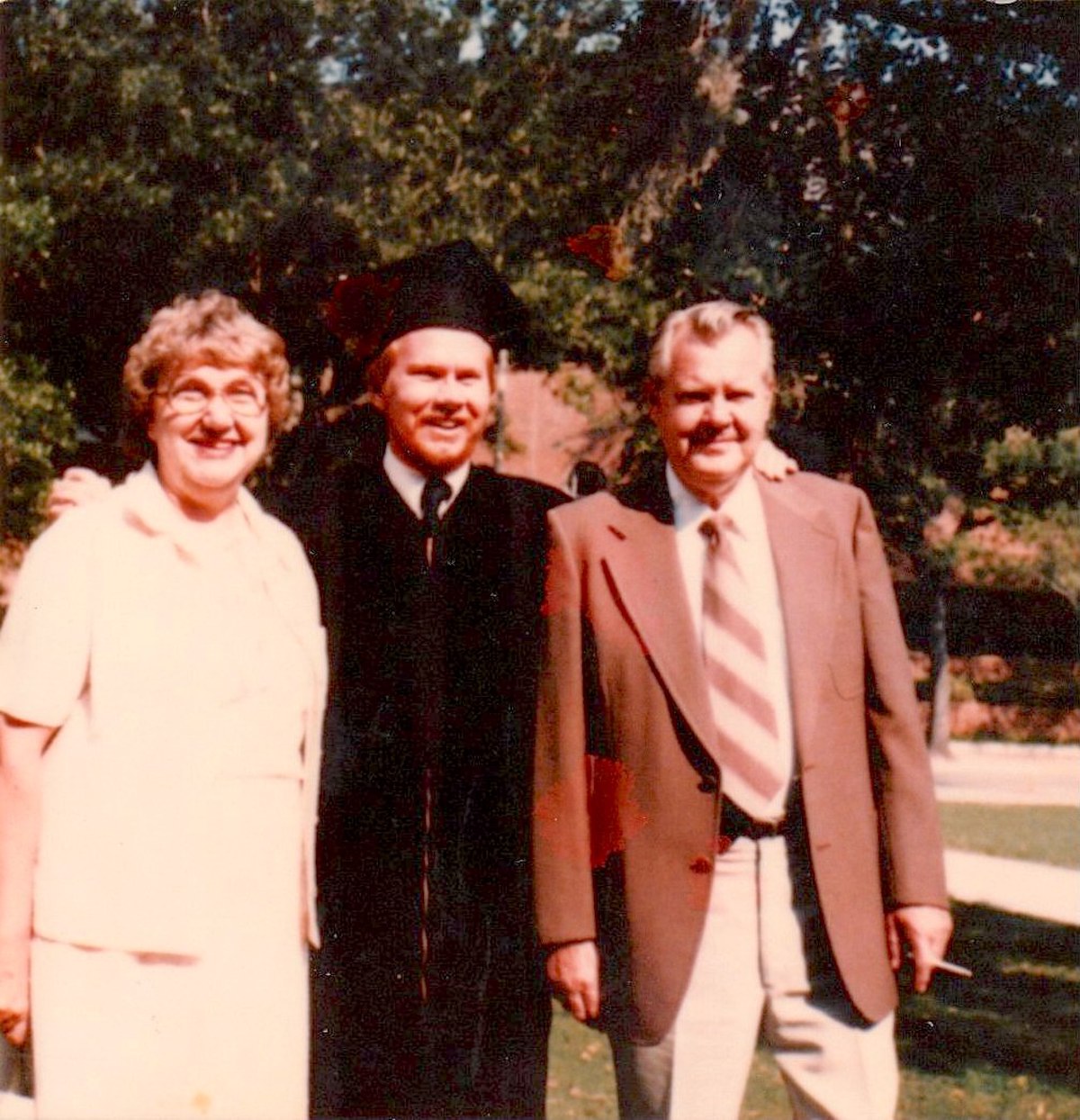 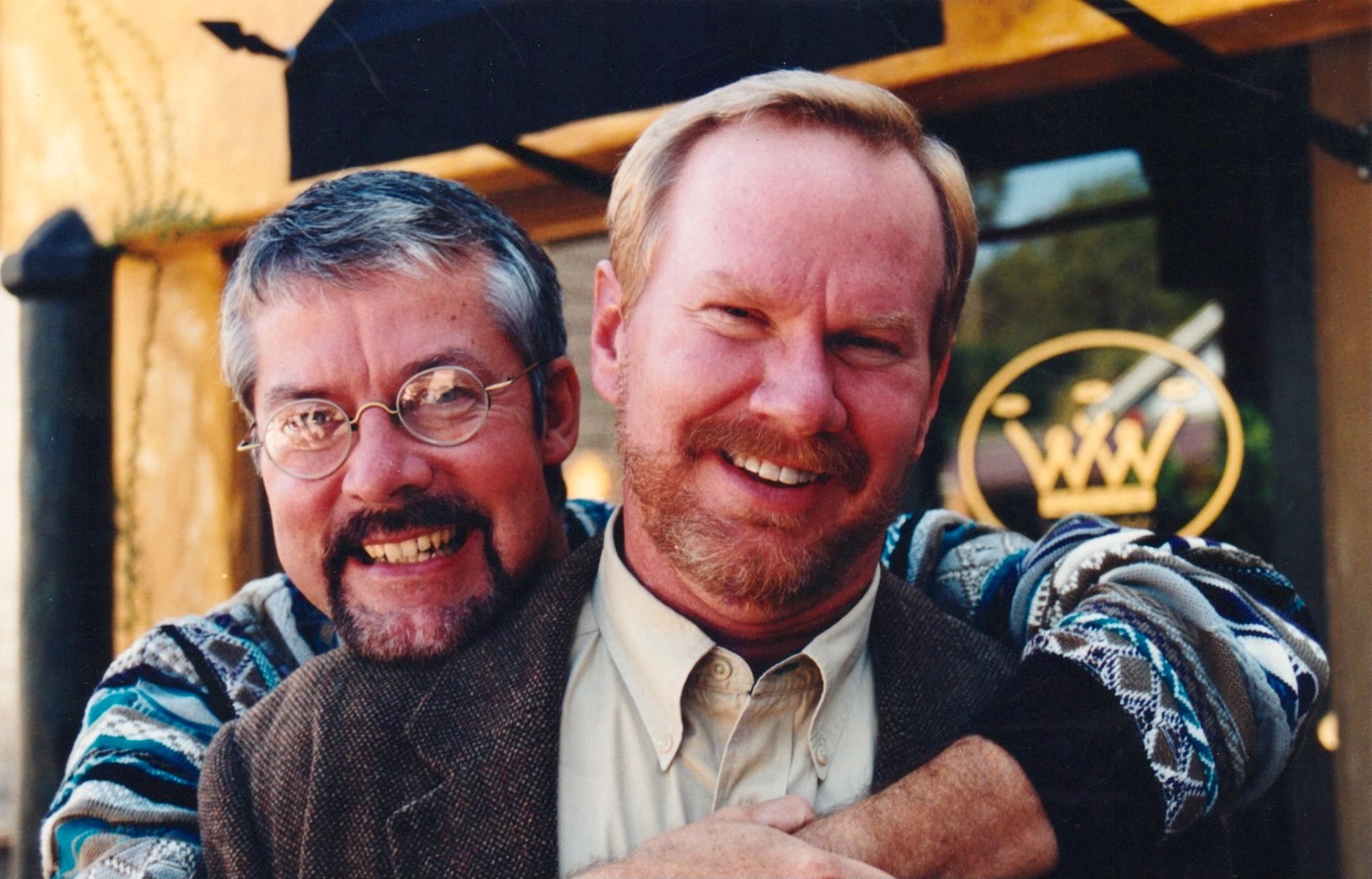 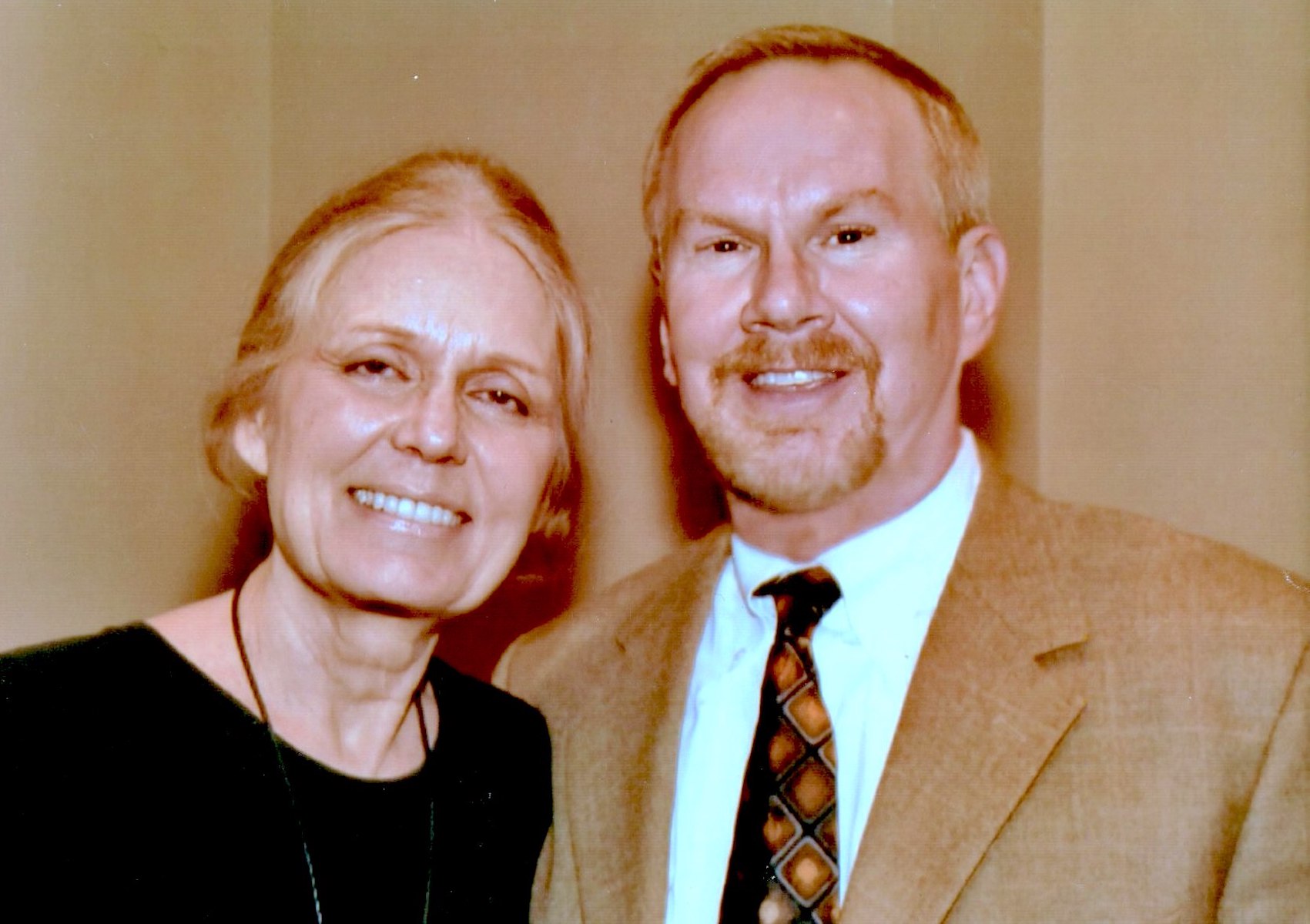 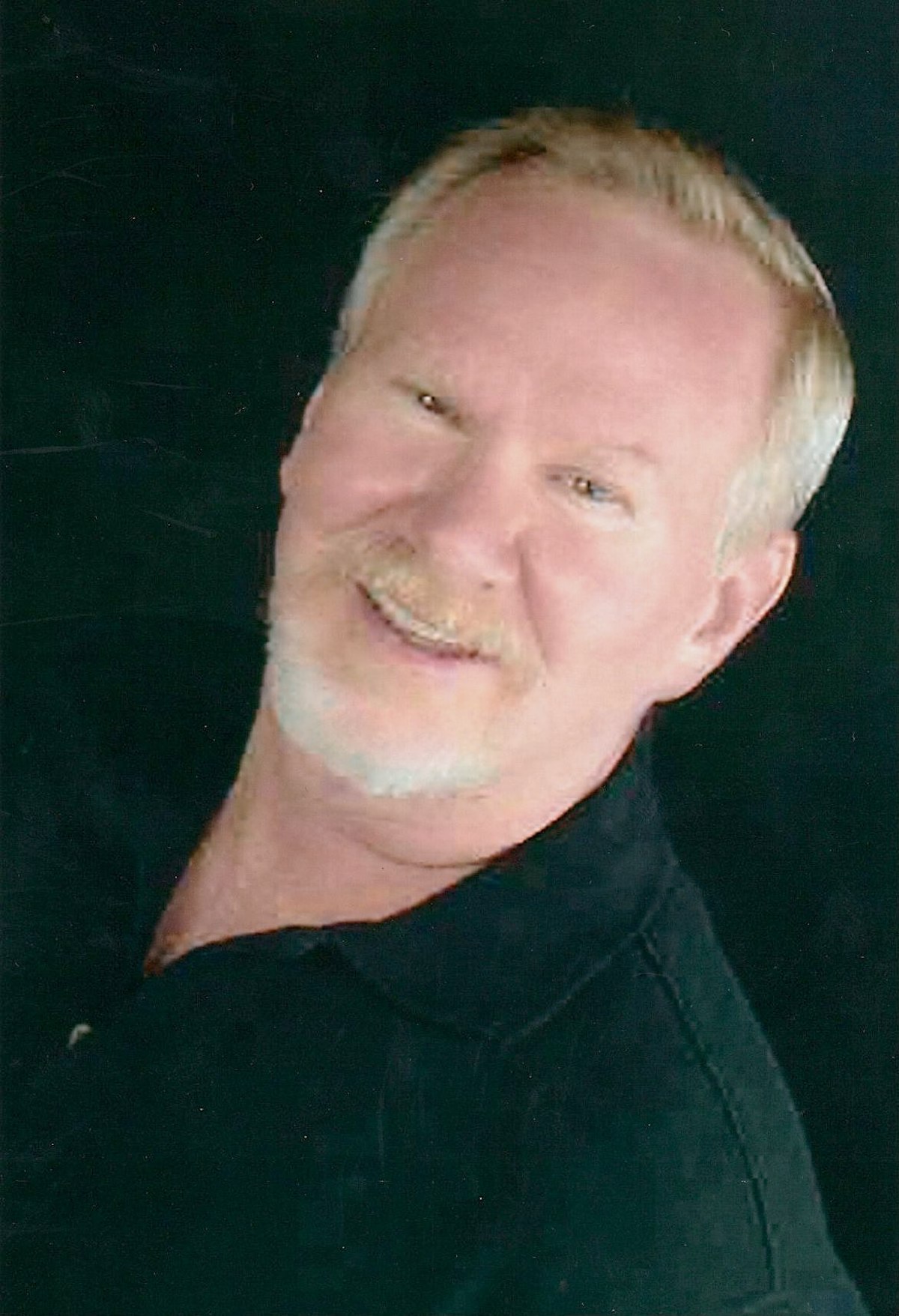 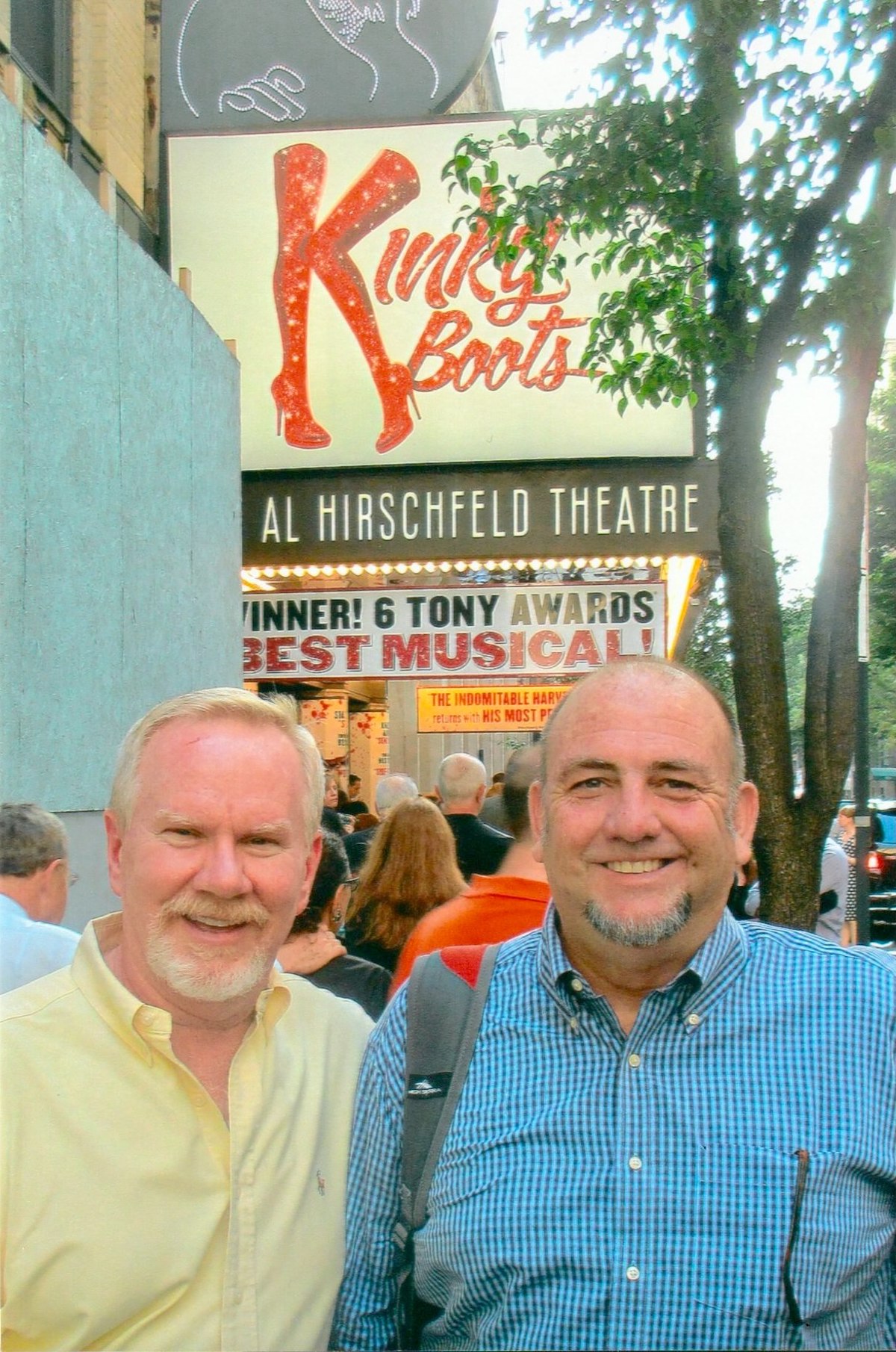 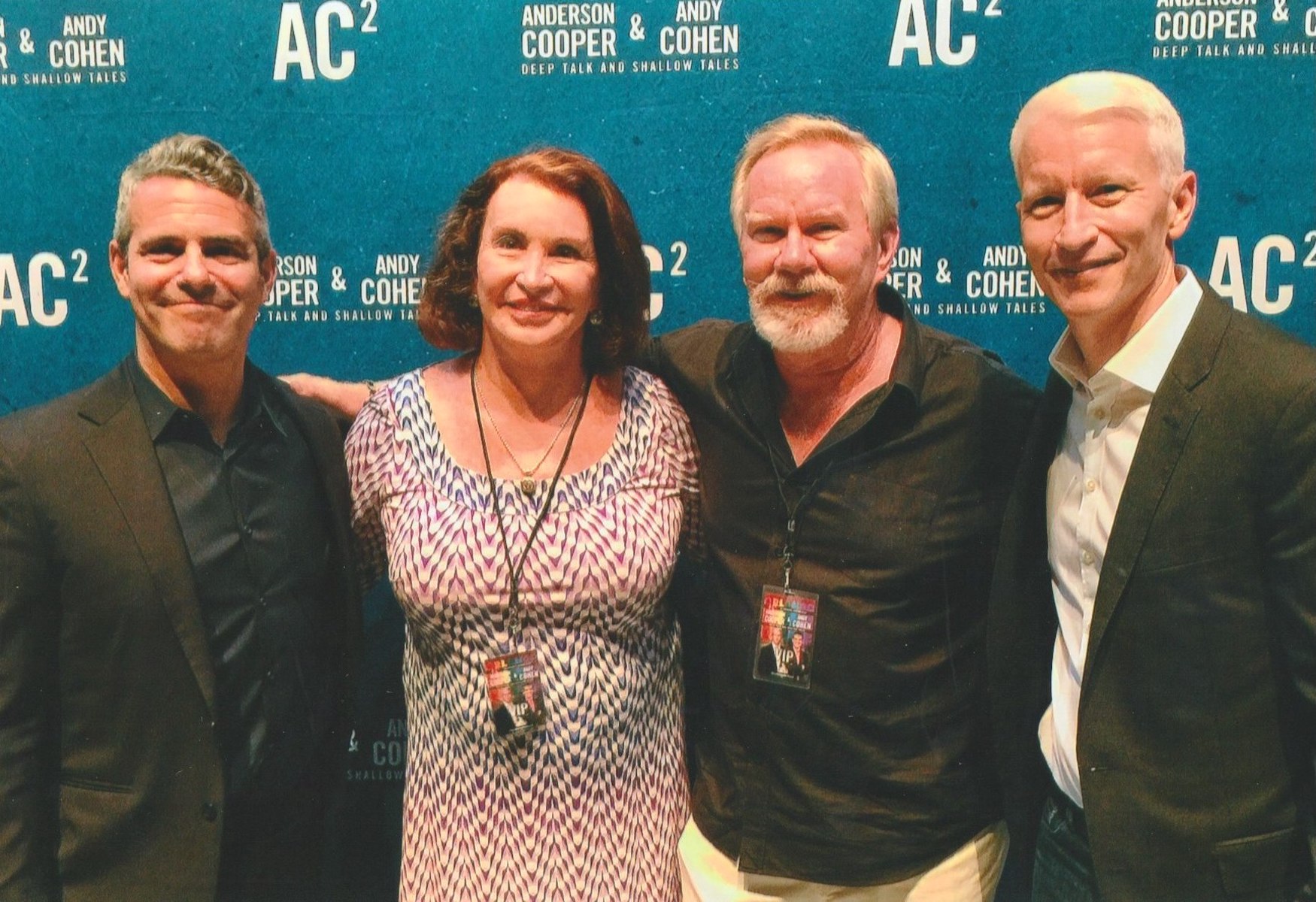 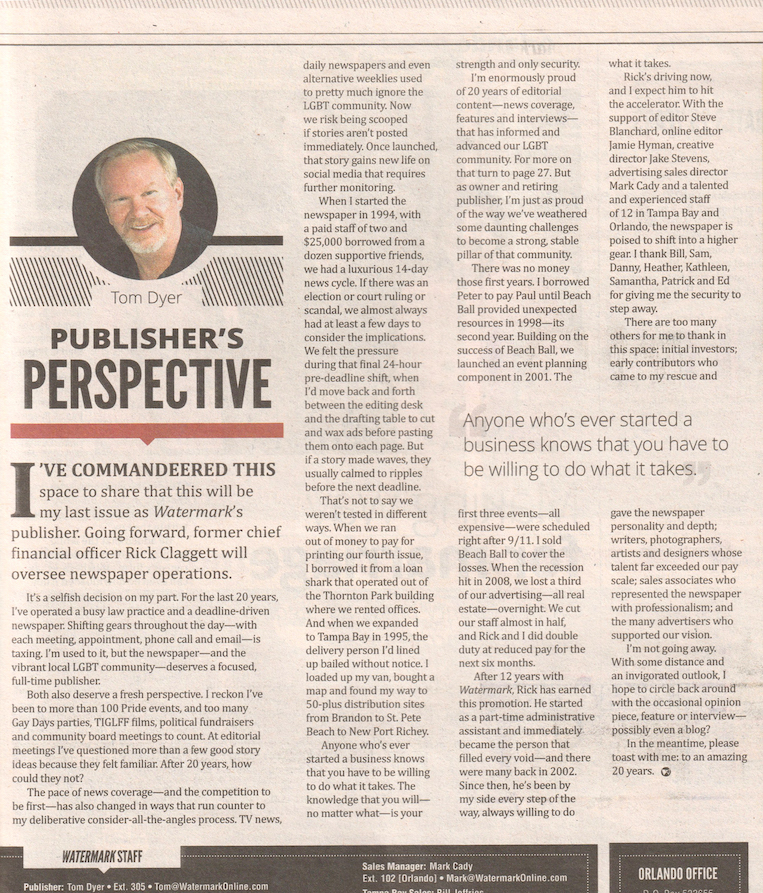 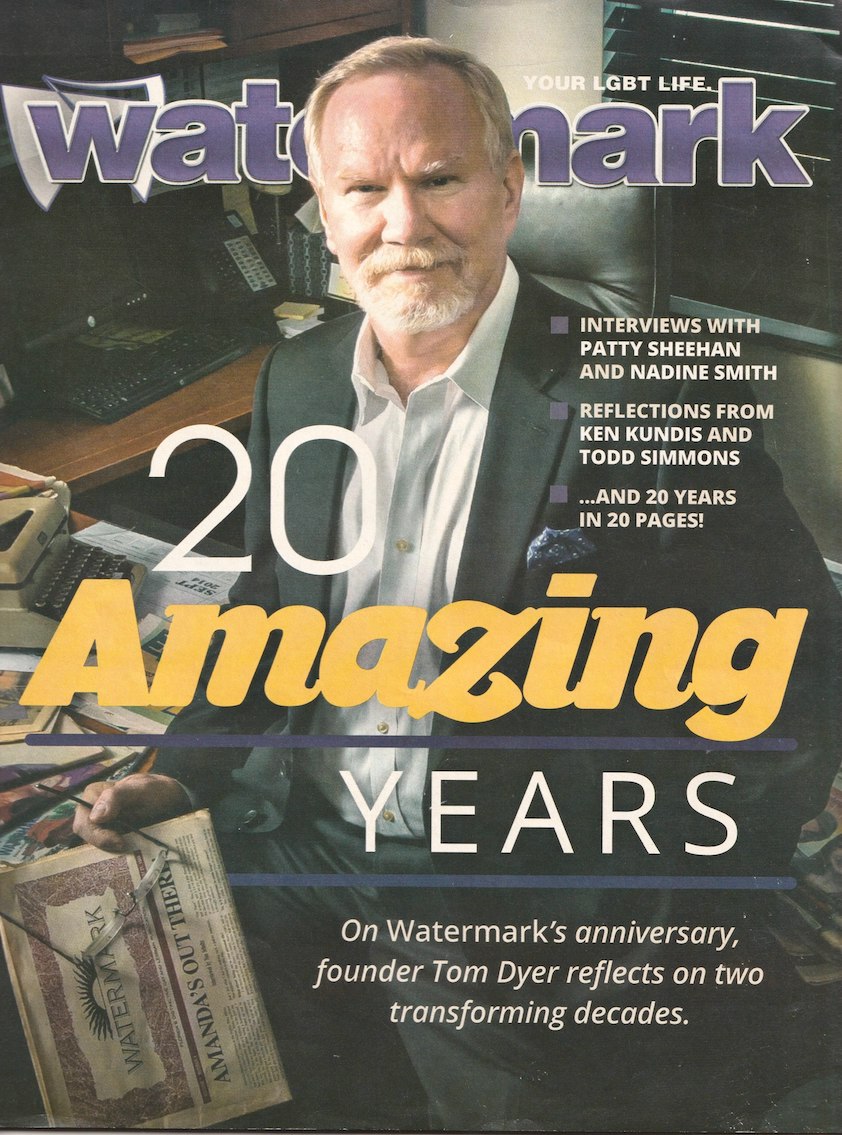 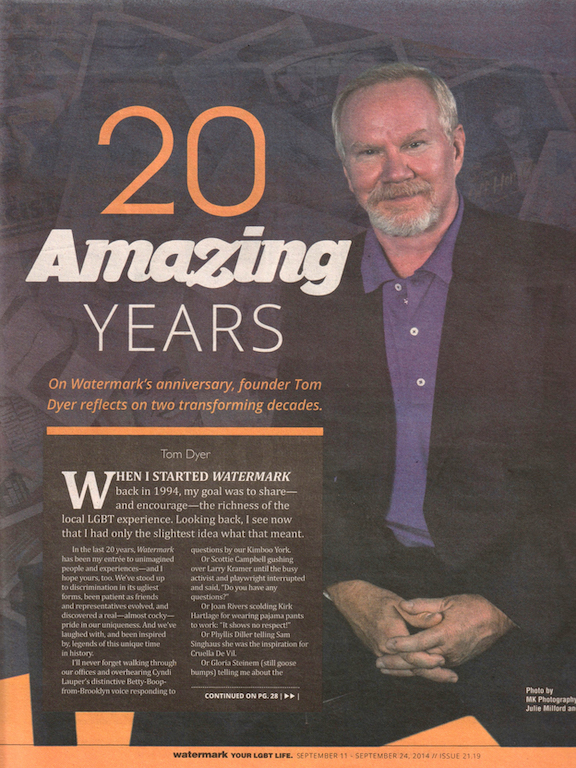 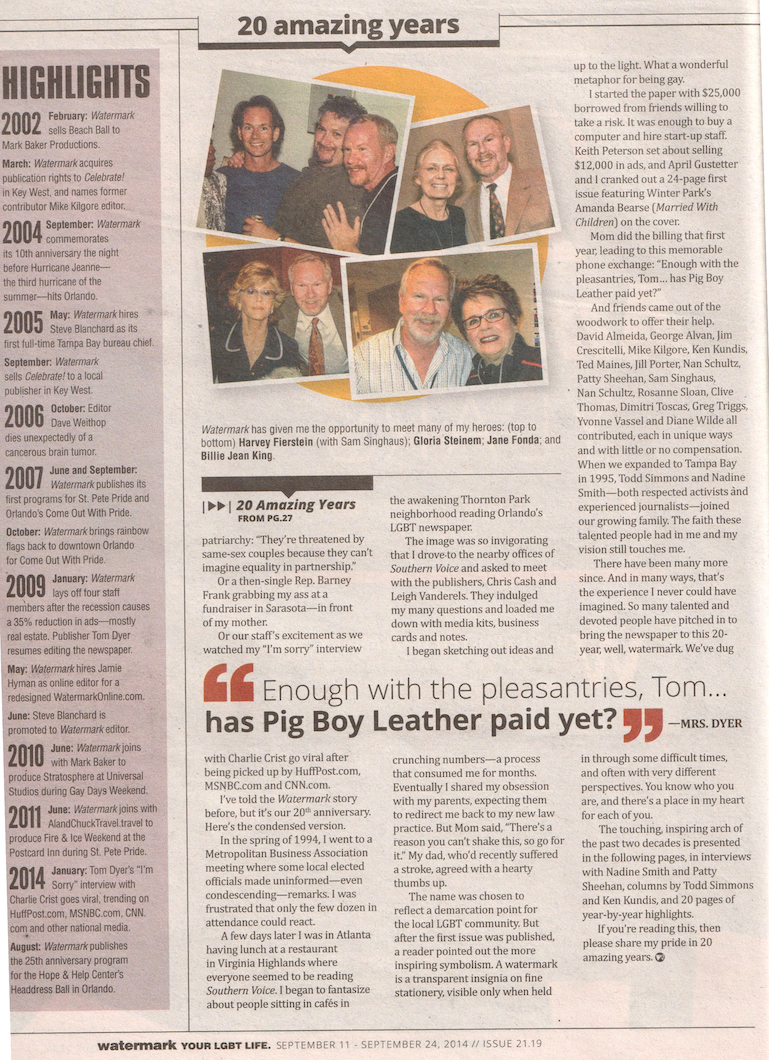