Advanced Search >
Luigi Ferrer was born in 1958 in Ponce, Puerto Rico. During his childhood, he bounced between Puerto Rico and Columbia, South Carolina, then attended the University of Miami. In 1985, Luigi was working on a Ph.D. in oceanography when he was diagnosed with HIV. Believing he had only a few months to live, he decided to dedicate his remaining time to battling the AIDS epidemic’s onslaught on the gay community. More than 30 years later, he’s still battling.
Luigi’s first post was executive director of Miami’s second-largest AIDS service organization, Body Positive. He later worked for several national HIV-specialized pharmacies, was president of Florida AIDS Action (now the AIDS Institute), and served on the boards of the AIDS Action Council and the National Association of People With AIDS. In 1996, Luigi was credited with playing a pivotal role in the first reauthorization of the landmark Ryan White CARE Act. Over the next five years, funding for the CARE Act’s drug assistance program increased from $52 million to $528 million.
The other major strand of Luigi’s life and work has been continually affirming his identity as a bisexual man, looking for ways to amplify the bisexual community’s voice, and striving to make sure that bisexuals’ needs and concerns are treated with respect. He was one of six founding board members of BiNet USA, and served as national coordinator for three years. He also helped found the South Florida Bisexual Network, and co-facilitated its bisexual support group for six years. In 1998, as part of a decades-long effort to counteract media portrayals of bisexual men as “the ultimate pariahs” of the AIDS epidemic, Luigi helped organize the National Institute on Bisexuality HIV/AIDS Summit, hosted by BiNet USA.
Over the years, Luigi has also found a way to reclaim and reshape the religious faith he grew up with. Today, he speaks with a prophetic voice about the need for queer people to speak up as people of faith, and to fight for a vision of faith that embraces difference and diversity, instead of demonizing it.
Luigi currently serves as health services outreach manager at Pridelines, Miami’s LGBTQ community center, doing daily battle with Miami-Dade County’s skyrocketing HIV rate, the highest in America. Because of his intense workload, Luigi asked if we could interview him on a Sunday morning at Pridelines. We were more than honored to oblige him.
Luigi Ferrer’s Elementary school photo, 1967, New Orleans, LA. Luigi Ferrer pictured: second row, 2nd from the right, next to Daniel who is his best friend (on end). Luigi Ferrer, 22, in oceanography school RUM/Ciencias Marinas, 1981, La Parguera, Puerto Rico. Ferrer recalls: “This is the picture I gave my first boyfriend.” Luigi Ferrer dancing with his first wife, Amilda, at his sister's wedding, 1986, Mayaguez, Puerto Rico. Luigi Ferrer at the SE Regional BiNet USA Conference, 1004, Greenville, NC. Ferrer recalls: “ I was serving as 1 of 6 BiNet USA National Coordinators. I met so many beautiful radically queer people here that it changed my worldview, and Faerie wings begin to sprout! Wearing LOVE/BiPride t-shirt produced by South FLorida Bisexual Network.” Luigi Ferrer in a Self portrait, 1995. Luigi Ferrer hanging out with bisexual activists Jill Nagle and Woody Cartwright after BiNet USA National Conference, 1996, San Francisco, CA. Luigi Ferrer was recognized, by the HRSA Ryan White program, as one of six people living with HIV that had made significant contribution to the successful rollout and implementation of the Ryan White Care Act, 1995. Award presented at the RW Title I/Title II meeting in Washington DC. Pictured (L-R): Jeanne White, Luigi Ferrer, and Greg Louganis. Luigi Ferrer is the President of Florida AIDS Action Council (FLAAC, now The AIDS Institute). In this photo they are on the way to statewide HIV Conference in Sarasota, 1996. Pictured: 2nd row, 2nd from left. Luigi Ferrer photo shoot with 2nd wife, Valerie, 2000. Luigi Ferrer hosting Radical Faerie gathering, 2001, Kelpie in Miami, FL. Luigi Ferrer enjoying magical faerie ice cream on a hot day on the knole, 2002, Short Mountain Sanctuary, TN. Members of the Board of Directors of the Unitarian Universalist Congregation of Miami. Luigi Ferrer picture front row, second from the left. Luigi Ferrer in full radfae garment. Ferrer recalled: “No heat in the winter, brrrrr it's in the 40's.” 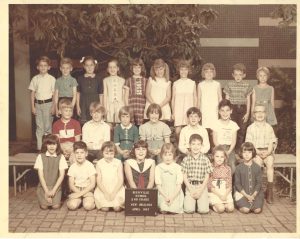 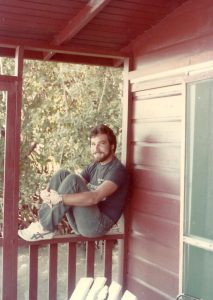 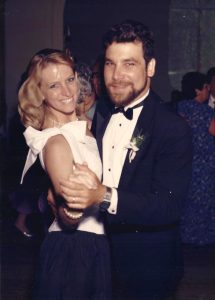 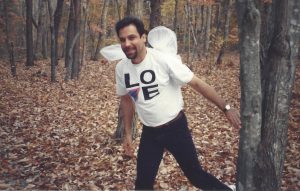 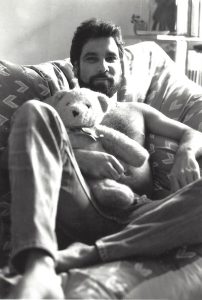 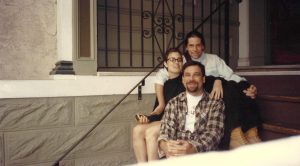 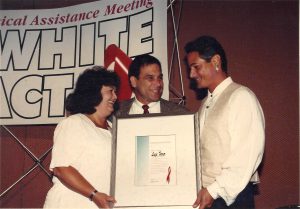 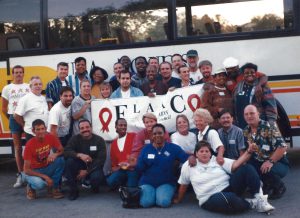 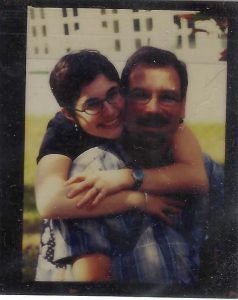 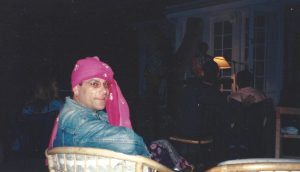 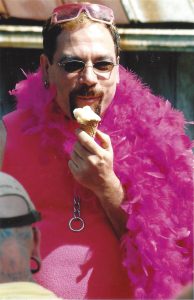 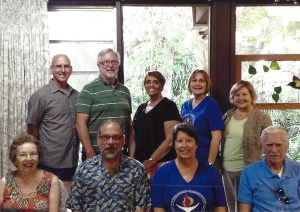 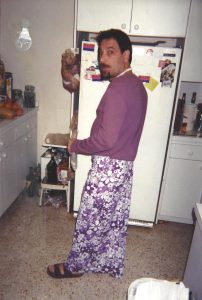