Advanced Search >
Jim Gribben was born in 1943 in Indianapolis, Indiana. Though his childhood was difficult, Jim’s “small but mighty” mother taught him strength and resilience. As a young boy Jim fell in love with performing, dancing in local talent shows, singing in school choir, regularly appearing on The Dick Summers Show, and eventually being offered a part in the 1963 film production of the smash Broadway musical Bye Bye Birdie. Shortly after graduating high school in 1961, Jim began his career as a professional dancer and choreographer.
In 1973 while performing in St. Paul, Minnesota, Jim met the man that would become his husband. Later they moved to Mabank, Texas, where they were pleasantly surprised to find a sizable lesbian and gay community. After a friend bought Friends Nightclub, the only gay bar in town, Jim founded the Friends Players and began putting on shows to benefit various charitable organizations. Over time, Jim, along with countless other LGBTQ folks, helped create a supportive, visible, and vibrant community in Mabank.
Throughout his varied and diverse career, Jim worked as a corporate credit manager at CA Roberts and Concord Industries, taught credit law at universities in Minnesota, Indiana, and Texas, served as board secretary for the Miss Gay Texas Pageant System, sung in the choir at Celebration On The Lake Church in Gun Barrel City, Texas, and directed, choreographed, and performed in countless productions.
OUTWORDS interviewed Jim Gribben in June 2017 at the home he shares with his husband, also named Jim, in a quiet, leafy neighborhood in Gun Barrel City. Jim told us he had decided to retire from singing and performing the following November, on his 74th birthday. He said his retirement would also be a birthday gift to ‘Jim #2’, who for 44 years had been running sound for Jim’s performances, and turning them into DVDs that could be sold for charity.
It was fascinating for OUTWORDS’ Los Angeles-based production team to compare notes with Jim on a number of topics, including what it means to be “out and proud”. Jim’s definition was much narrower. To him, coming out to strangers could be a form of disrespect, not that different from walking up to them and telling them they were raising their children wrong. This was surprising to us – but then, small-town Texas is very different from coastal California. Thankfully, LGBTQ people are living, and sowing the seeds of lasting change, in both places.
Jim playing piano as an 8th grader. Photo courtesy of Jim Gribben. Jim getting ready for a performance. Photo courtesy of Jim Gribben. L-R: Jim Strenger, Clara Naomi Gribben (Jim’s mother), and Jim Gribben. Photo courtesy of Jim Gribben. Jim Gribben on the opening night for the Double J Ranch. Photo courtesy of Jim Gribben. L-R: Jim Strenger, Shannon, and Jim Gribben. Photo courtesy of Jim Gribben. Jim with the Celebration of the Lake Church choir. Photo courtesy of Jim Gribben. 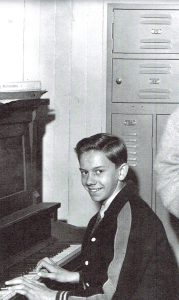 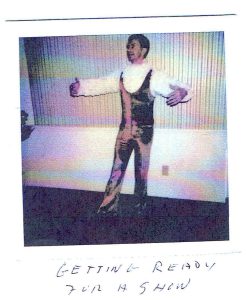 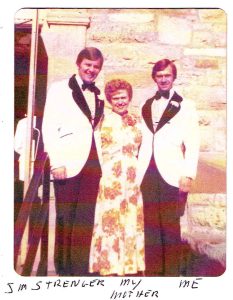 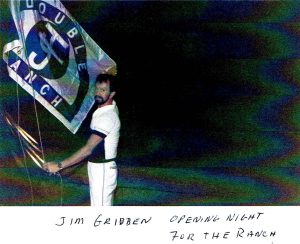 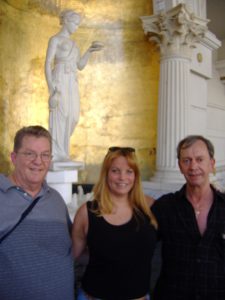 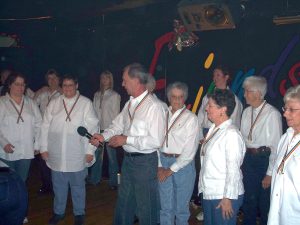