Advanced Search >
Jim Vegher was born in 1939 in San Pedro, California, the second oldest in a family of eight kids. Jim’s devoutly Catholic father was thrilled when Jim entered a Catholic seminary in ninth grade. When Jim quit the seminary two years later, his dad was devastated. Jim’s sense of self-worth cratered. A few years later, his mother suffered a nervous breakdown. The family splintered. It was a rough beginning to an ultimately lustrous life.
John Grigsby was born in 1947 in Austin, Texas, and grew up largely in the small town of Burnet, about fifty miles away. His family was quintessentially Texan, including a grandfather who was the longest-reigning county sheriff in Texas history and an uncle who was a Texas Ranger. “I probably rode a horse before I could walk,” John says. After fooling around with his best guy friend BJ in high school, Jim married his best girl friend at 19. Graduating college and heading off to medical school at the University of Texas, his path seemed set.
Joining the military brought some order and purpose to Jim’s life. From there, he graduated from the University of California at Santa Barbara, got a job, dated a nurse, and eventually moved in with her. At age 32, Jim saw a guy on the beach. The guy saw Jim, too. Drinks ensued, and Jim soon experienced his first kiss with a man. “At that moment, the thing I’d been yearning for my whole life came true for me.”
After four years of marriage, John’s wife left him. Soon after, a friend took him to a gay country western dance bar outside San Antonio. John saw 300 guys in cowboy boots and hats dancing with each other, and never looked back. After medical school, he fled Texas and ended up in San Francisco. One night, he threw a birthday party for a friend. Hordes of people showed up, including Jim, who was visiting with his then-boyfriend. Although sparks flew, it still took three years for Jim and John to get together. They’ve been with each other ever since—46 years at the time of their interview.
Both Jim and John had impressive careers. Jim worked for a Fortune 500 company before starting his own medical management and software company. John served as Chief of Emergency Services at Good Samaritan Hospital in Portland, Oregon. Together, they started a joint venture with Good Samaritan to open up several urgent care centers. Along the way, they took heat from their gay friends for steadfastly refusing to be closeted, no matter the circumstances. “We never shied away from, ‘Are you two brothers?’ ‘Are you two friends?’”, Jim says. “‘No, we’re a couple.’ Period.”
The turning point on Jim and John’s activism took place in 1988. Oregon’s religious right had organized a successful referendum to overturn the governor’s anti-discrimination executive order. A year later, Jim and John launched the Equity Foundation, a multi-million dollar endowment that helped fund countless organizations working across Oregon in support of diversity and inclusion—and against everything that the religious right stood for. Not stopping there, Jim and John bought a rundown mansion in Portland’s Eastmoreland neighborhood, renovated it top to bottom, and opened it up to countless charitable causes and events—38 functions with more than 8,000 guests during the five years they lived there.
In 2016, after 27 years, the Equity Foundation merged with a larger regional organization called the Pride Foundation, with the shared goal of creating a more fair and equitable world for all.
Over the years, like virtually every successful couple, Jim and John have had to work out their differences. “What always helped us,” John says, “is we were each other’s mutual admiration society.” “I wanted to be like John,” Jim says, to which John replies, “and I wanted to be like you.”
Towards the end of their OUTWORDS interview, Jim and John recited their favorite quote from the poet Robert Browning: “Grow old along with me! The best is yet to be, the last of life, for which the first was made.”
John at age 2, 1949. John at age 4, 1951. Jim with the McBrides, 1970. John and Jim playing, Kenilworth, 1974. John, 1974. John and Jim at Yosemite National Park, California, 1974. John and Jim on their first cruise, 1980. John and Jim with their dogs Jason and Jeremy, 1983. John and Jim at Eastmoreland House with their dogs Jason and Jeremy, 1983. John and Jim on Halloween, 1984. John and Jim at Eastmoreland House, 1985. John, his mother, and Jim, 1985. Oregon Governor Barbara Kay Roberts, John Grisby, and Jim Vegner. John and Jim cooking at their cabin, 1991. John and Jim inside the cabin, 1994. Jim on skis. John on sled. John and Jim outside the snow-covered cabin, 1994. Jim, 1991. John with Silvia. John Grisby, Jim Vegner, and Rich Betger. John Grisby and Jim Vegner with Lily Tomlin at an equity benefit. John and Jim at the Marriage Rally, Rhode Island, June 2009. Their sign reads, “Jim & John, Together 33 Years, Legally Married 5 Years”. John and Jim sailing. John and Jim in Newport, RI, 2010 or 2011. John and Jim in Glacier National Park, Montana, 2015. A close-up portrait of John and Jim. John and Jim on a cruise. 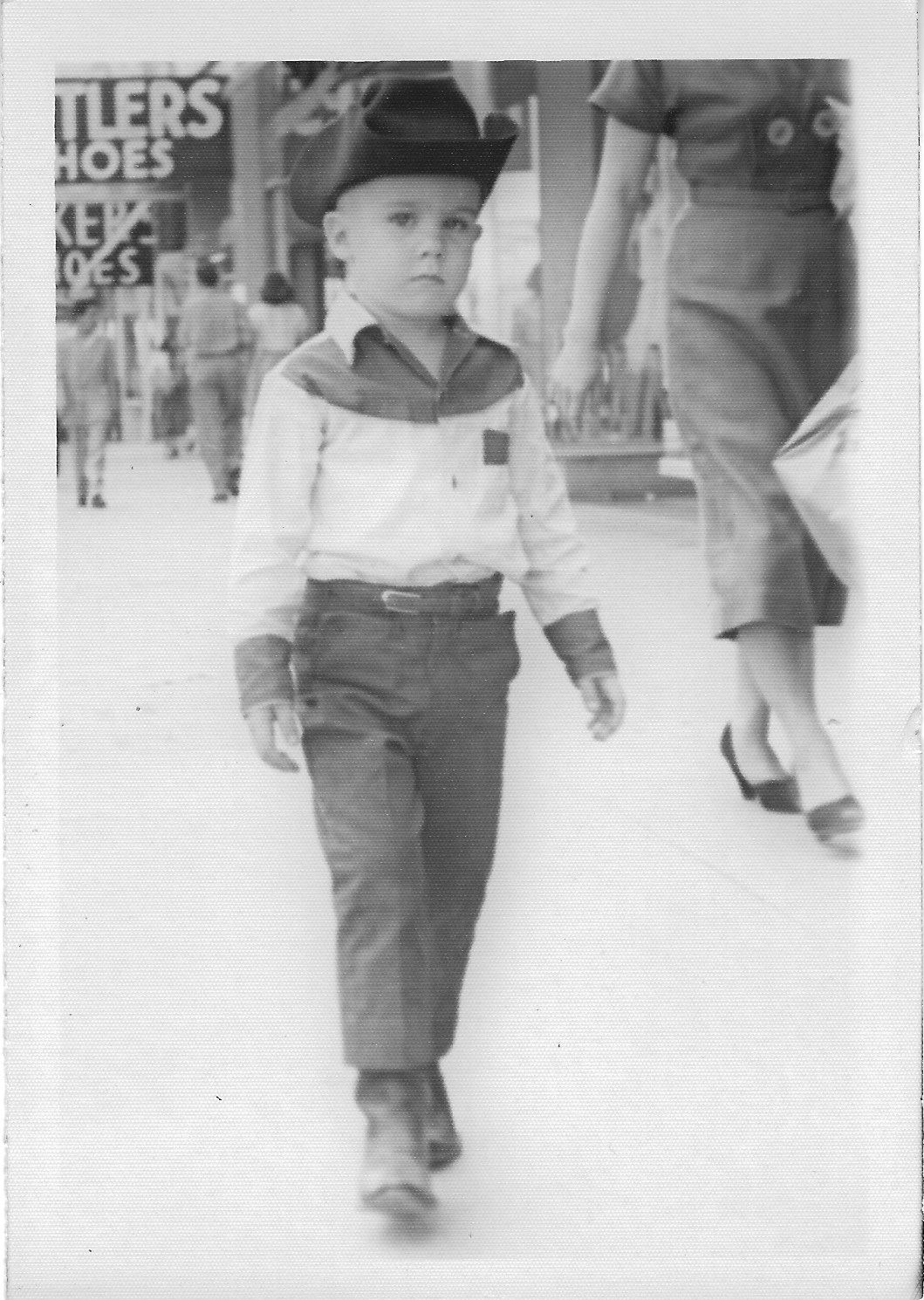 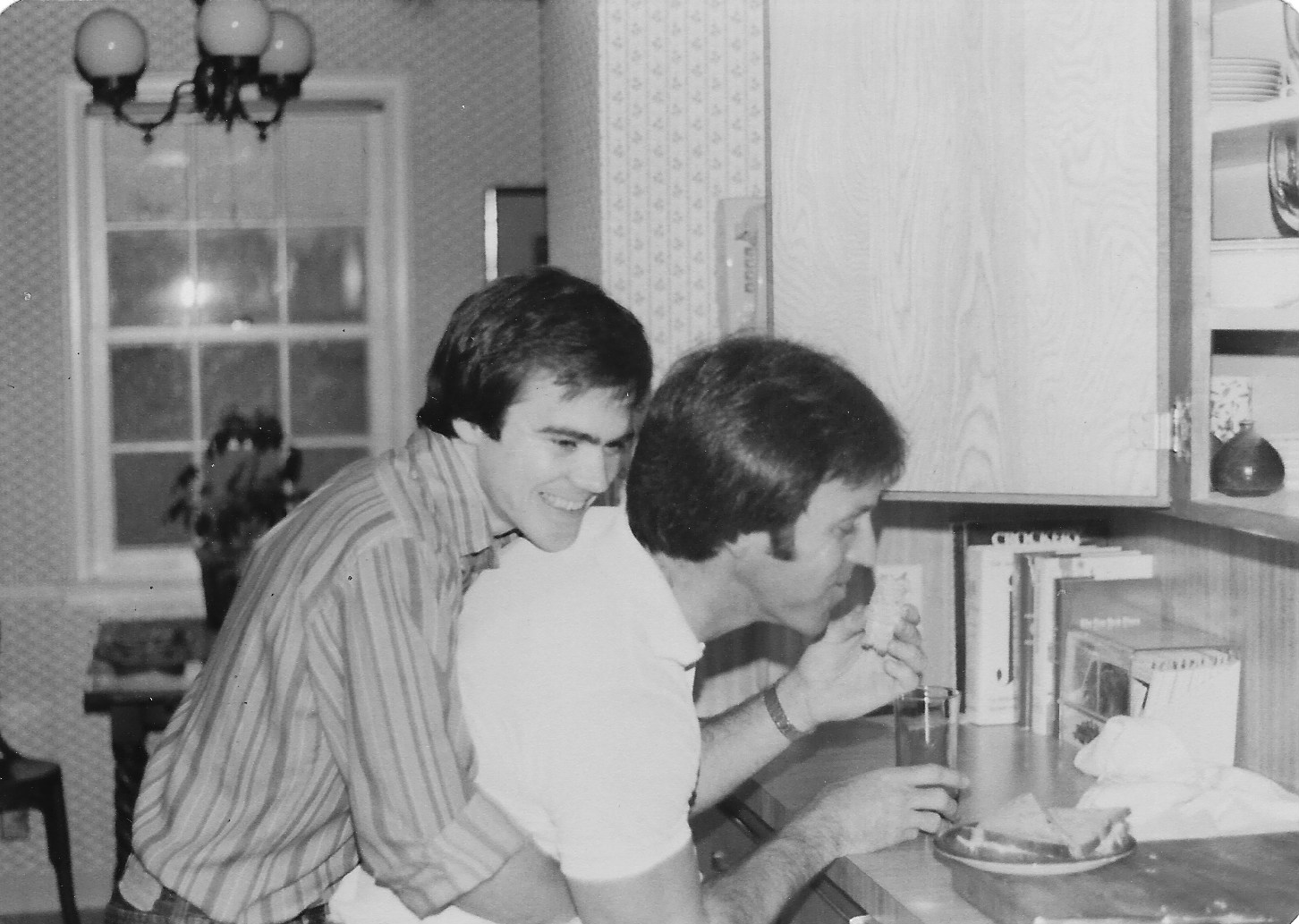 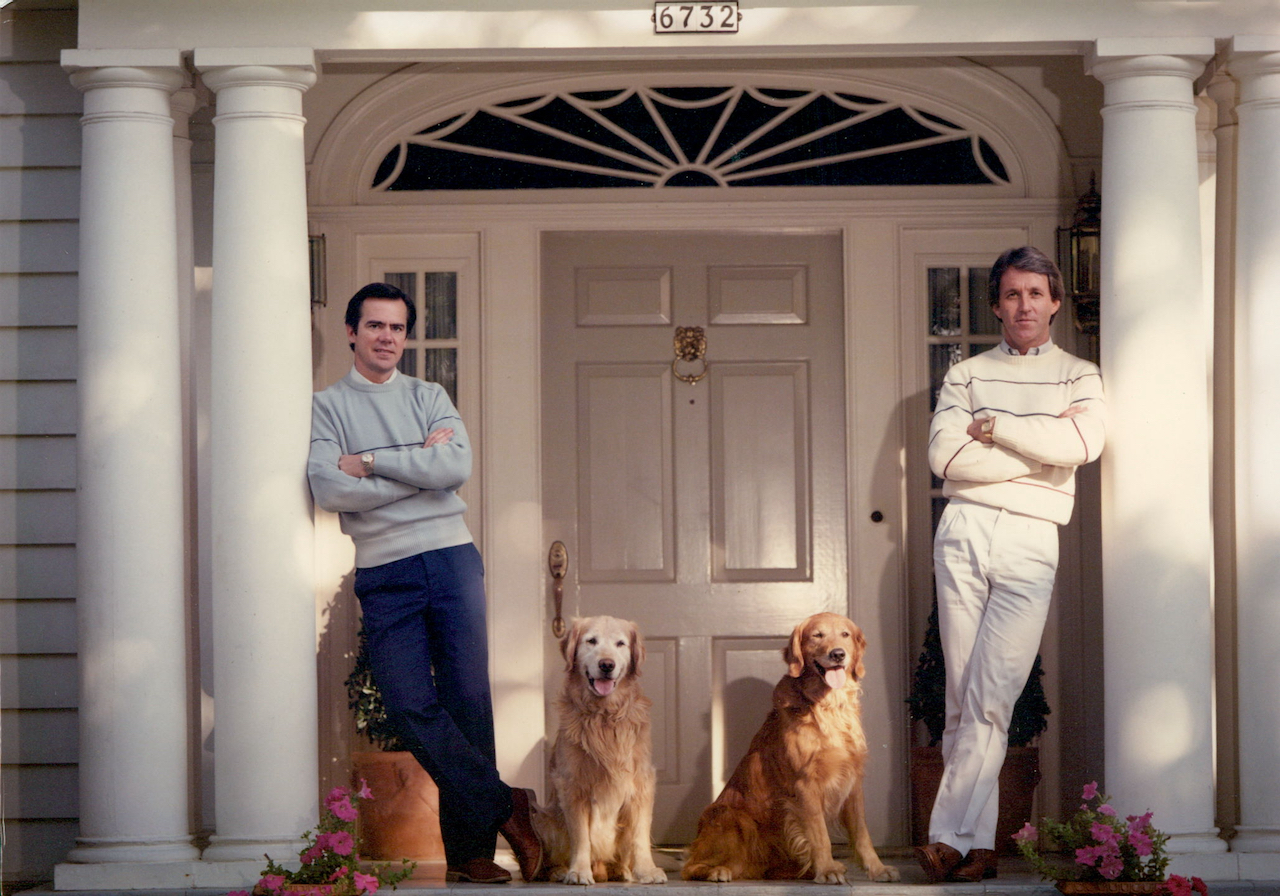 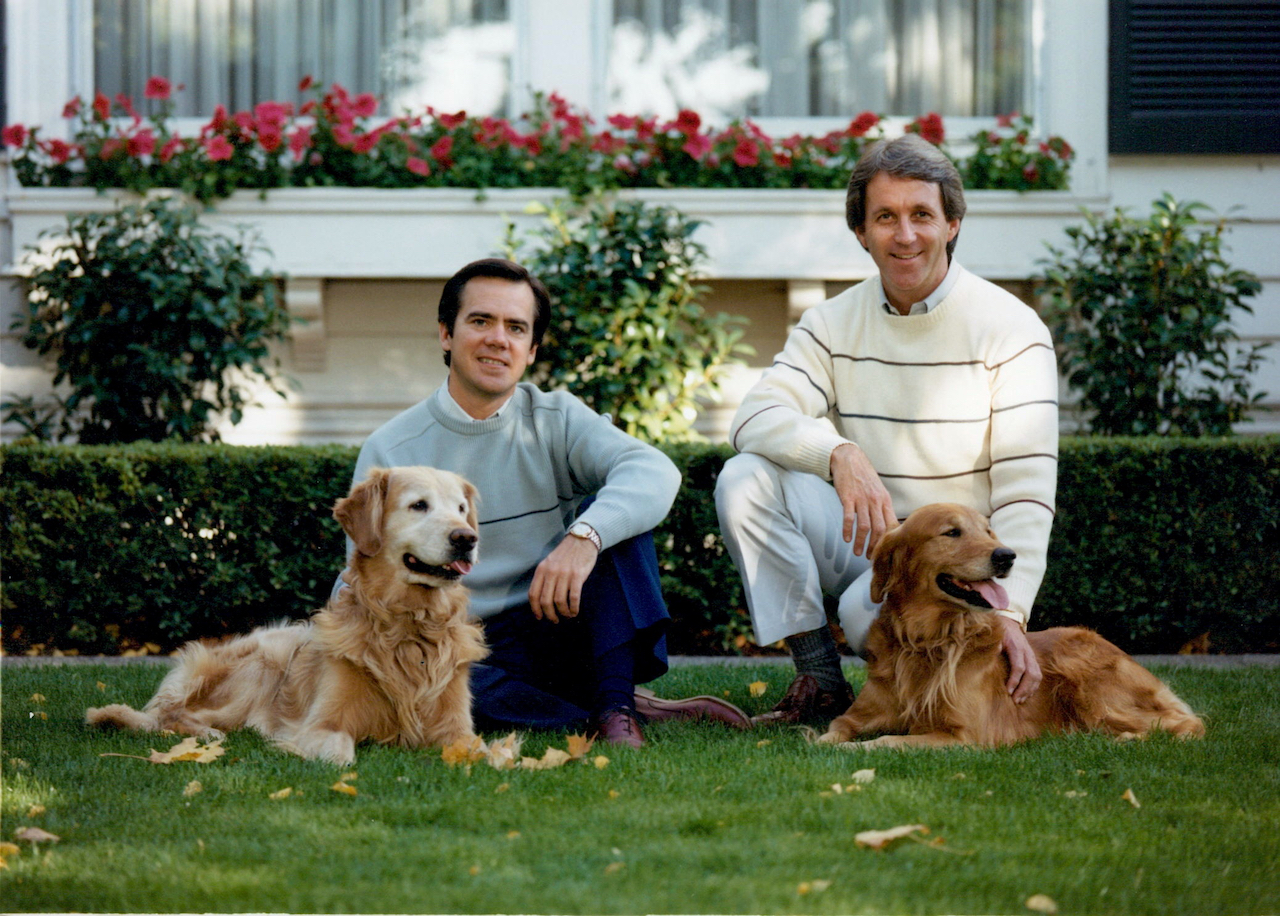 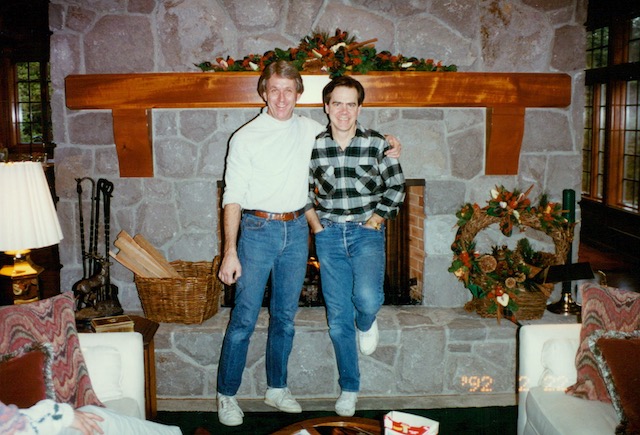 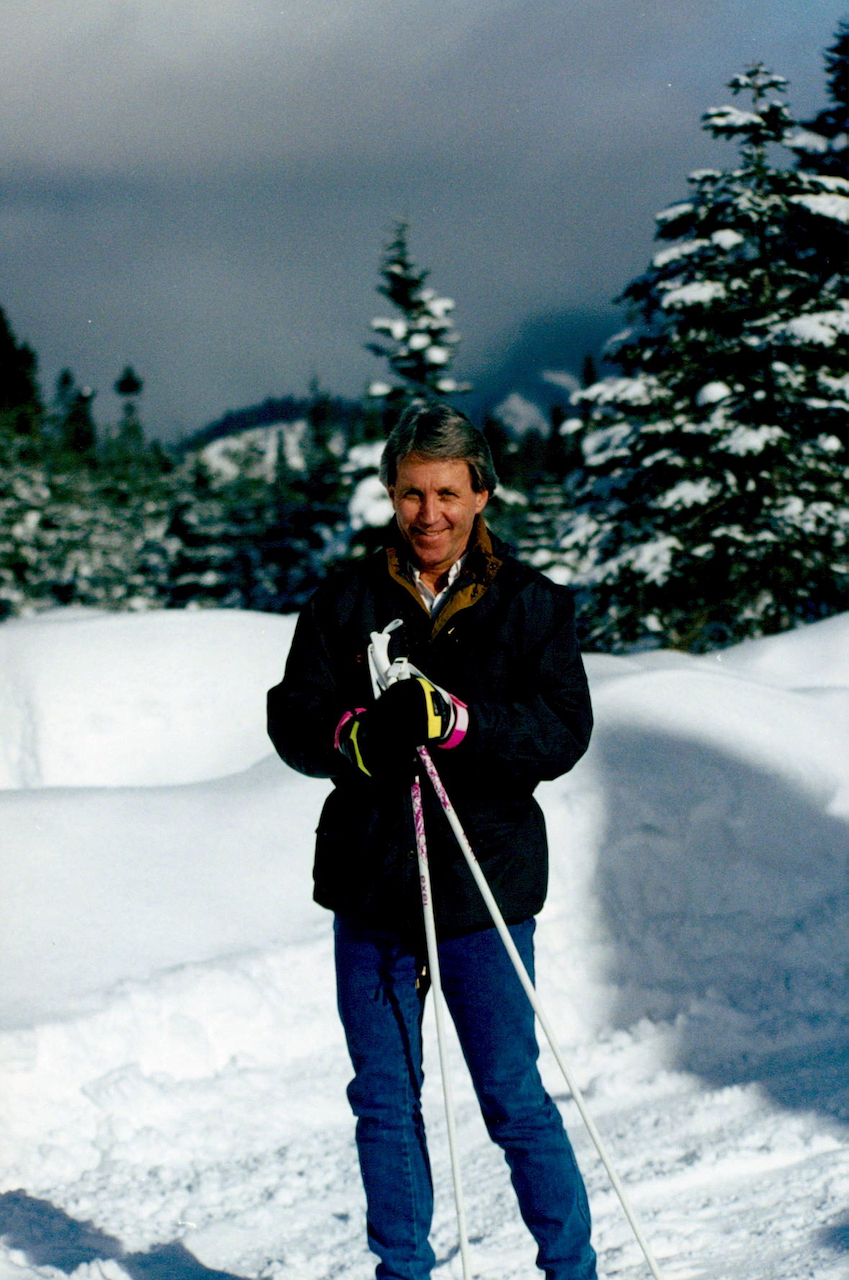