Advanced Search >
Pat Hussain was born in Atlanta, Georgia in 1950. She attended segregated schools though high school. In 1963, Pat attended a civil rights sit-in at a Krispy Kreme doughnut shop. When a man purposely poured a hot cup of coffee down the back of a fellow protestor, Pat stood up and left to prevent herself from lashing out. She realized she wasn’t cut out for non-violence.
Married twice to men, Pat came out as a lesbian in her late 20s. In 1984, Toys “R” Us hired her, even after she disclosed in her interview that she was queer. At work she met Cherry, a fellow employee. Pat helped Cherry escape from a physically abusive marriage, and the two became partners, jointly raising Cherry’s two kids from her previous marriage.
Pat was always at the center of community organizing. She stuffed envelopes for the NAACP, co-founded the Atlanta chapter of GLAAD, helped the Gay and Lesbian Task Force prepare for the 1993 March on Washington, and was the Grand Marshall for the first Pride parade in Knoxville, Tennessee. Prior to the 1996 Olympic Games in Atlanta, when the commissioners of nearby Cobb County approved an anti-gay resolution, Pat led a successful campaign to move the Olympic volleyball competition out of the county.
At the 1993 National LGBTQ Task Force conference, Pat joined five other women to found Southerners on New Ground (SONG). SONG creates community, fights for rural LGBT equality, and emphasizes intersectionality. Their current campaigns include advocating for sliding scale municipal fees based on income, and creating review boards to increase local police accountability.
In recent years, due to ongoing PTSD and clinical depression, Pat has had to step back from active organizing. On the upside, she and Cherry are now grandparents, and recently celebrated their 30-year anniversary together.
Pat asked to be interviewed for OUTWORDS at the SONG House in Atlanta’s West End, the neighborhood where she grew up. During her interview, the house was abuzz with SONG staff and volunteers making phone calls, typing articles and blog posts, and generally pursuing SONG’s mission of (in their own words) “building a political home across race, class, culture, gender and sexuality.”
This house, this neighborhood, this movement, and this hope are Pat’s home. For further information about SONG, please visit southernersonnewground.org.
Pat Hussain sitting on a couch with her artwork in the background. Pat Hussain’s portrait from boot camp training at the Marine Recruit Depot, 1972, Parris Island, SC. Pat replaced her brother who became too ill to remain in the military. Pat Hussain at her wedding at the age of 18. Pat Hussain with her dog Beauty, 1969. Jon-Ivan Weaver and Pat Hussain celebrate the victory of supporters Ansley Square, 1994. Courtesy of Pat Hussain. (L-R) Cherry Hussain, Ed Scruggs, and Pat Hussain at the first press conference: Olympic Experience, 1994, Underground Atlanta, GA. Courtesy of Pat Hussain. Pat Hussain at the march for Immigration Reform. 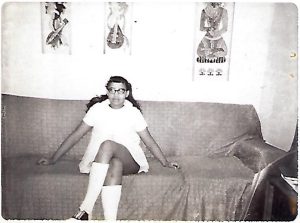 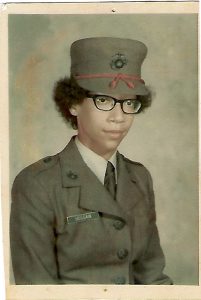 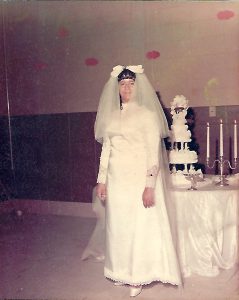 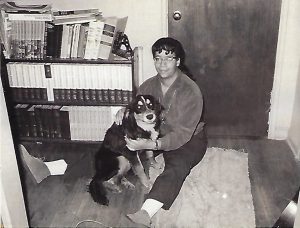 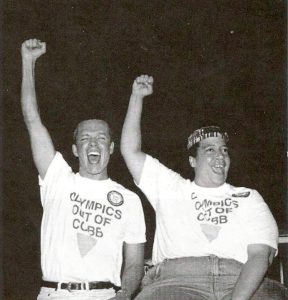 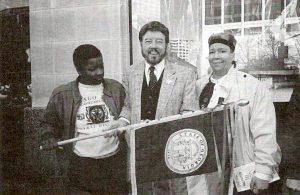 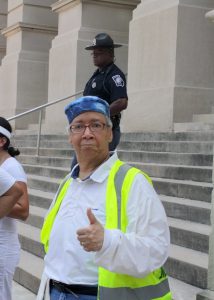