Advanced Search >
John James was born in 1941 in Brooklyn, NY. His father, a Montana native, was a lawyer; his mom was from Iowa and sold real estate part-time to help make ends meet. As a child, John’s family moved around. From 9 to 12 years old, they lived in Germany. After graduating from high school, John attended Harvard College, graduating in 1963.
John began to figure out he was gay in his teens, but didn’t fully accept it until he was 20. His biggest fear was the law of unforeseen consequences – in his own words, “getting in over my head”. Also, during his college years, Massachusetts law provided a long prison term for “the abominable crime against nature” – greatly increased if it occurred on a Sunday.
On July 4, 1965, five years before Stonewall, a consortium of gay rights groups operating under the name East Coast Homophile Organizations (ECHO) staged the first Reminder Day march in front of Philadelphia’s Independence Hall. Originally conceived by activist Craig Rodwell, the event was created to remind the American people that millions of queer American citizens were denied the rights of “life, liberty, and the pursuit of happiness” spelled out in the Declaration of Independence. Although he was employed at the time by the National Institutes of Health, a federal agency, John joined 38 other people at the event. A photographer captured him there: tall, thin, and dressed like the other men in a dark suit and tie.
But John’s most important work by far was creating and publishing AIDS Treatment News from 1986-2007, part of an underground information network that people with AIDS, doctors, researchers and even the federal government turned to for the latest information about the disease. Thanks to such newsletters, drug companies gradually became more responsive, doctors started treating HIV+ people as partners, and people with AIDS seized control of their own health. According to the New York Times, the most influential newsletter was AIDS Treatment News, which by 1991 had 5,000 subscribers and was produced every other week for 20 years by John and six researchers in John’s tiny San Francisco apartment.
Today, John lives at the John C. Anderson Apartments, an LGBT-friendly seniors community on a tree-lined street just over a mile from Philadelphia’s Independence Hall. John’s apartment is almost bare. For his interview, he sits on a squeaky $2 folding chair from a local AIDS thrift store. Tall, gangly and self-effacing, John has spent his life devoting his resources to things that matter. He almost certainly saved some people’s lives. Without a doubt, he saved many people’s dignity.
John James marching (holding the "maximum contribution to society" sign). 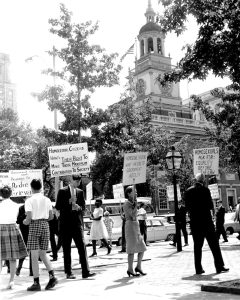 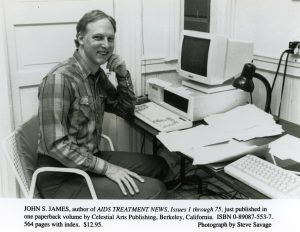 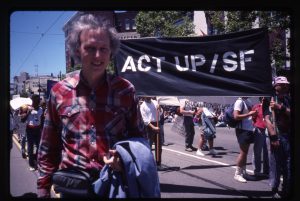 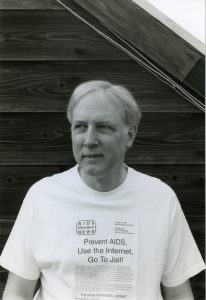 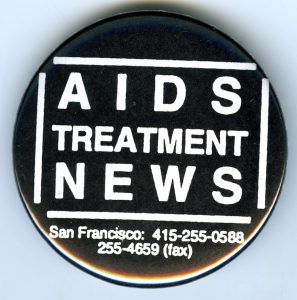