Dick Leitsch was born in 1935 in Louisville, Kentucky. While in high school, he came out to his Catholic parents, who took his revelation in stride. Bolstered by their support, Dick was living openly as a gay man by the 1950s. He got rowdy in the local Louisville gay bars, but in 1959, inspired by watching movies and hearing radio shows about New York, he took the plunge and moved to the Big Apple, where he supported himself in subsequent years as a journalist, waiter, bartender, painter, and holiday decorator.

Soon after arriving in New York, Dick met and fell in love with Craig Rodwell, a former ballet student from Chicago by way of Boston. Craig convinced Dick to come to some meetings of a nascent gay rights organization called the Mattachine Society, and by 1964, Dick was the group’s president. Two years later, in a rascally mood, Dick, Craig and a couple of buddies came up with the idea of ‘sip-ins’ (fashioned after the sit-ins of the civil rights era), to focus attention on bars and restaurants that were refusing to serve gay people. Ultimately, their actions led to legal rulings that queer people had the right to peacefully congregate in bars – or wherever they chose.

On the night of June 28, 1969, Dick heard something on the radio about a disturbance at the Stonewall Inn. Hopping a cab, he arrived in time to witness the glorious mayhem that would alter the gay rights movement forever. Dick’s account of the riots was later published in The Advocate.

OUTWORDS had the pleasure of recording Dick’s story in August 2016, on our first East Coast interview trip. In early 2018, Dick received a diagnosis of terminal cancer. He made arrangements to donate his files and photos from a half-century of gay activism to the New York Public Library, then celebrated his 83rd birthday by attending the 50th-anniversary Broadway revival of The Boys in the Band. Commenting on the steady stream of visitors he’d had since his cancer diagnosis, Dick said, “Had I known how much fun this would be, I’d have done it a lot sooner.”
Dick Leitsch, circa 1946, Louisville, KY. Dick Leitsch (left) with a childhood friend in his hometown, Louisville, KY. Dick Leitsch with a friend at Flaget High School or Bellarmine College, both in Louisville, KY. Dick Leitsch, junior year at Flaget High School, circa 1952, Louisville, KY. Dick Leitsch, graduation photo, Flaget High School, circa 1953, Louisville, KY. Barbara Gittings and Dick Leitsch at a Reminder Day picket, July 4, 1966 or 1967. Credit: Photo by Kay Tobin Lahusen, courtesy of the Manuscripts and Archives Division, The New York Public Library. Dick Leitsch featured on The New York Post for his involvement in the Mattachine Society ‘Sip-In’, 1966, New York, NY. Photographer Credit: New York Post Archives. Dick Leitsch at his desk when he was the president of Mattachine NYC in the office located at 1133 Broadway, New York, NY. The poster beside him, “Equality for Homosexuals”, were produced as bumper stickers initially. Nobody was willing to put them on their car for fear of retaliation so they ended up dispersing them all over the village to get rid of them. (L-R) John Timmons, Dick Leitsch, Craig Rodwell and Randy Wicker, members of the Mattachine Society New York chapter, were refused drinks at Julius’ Bar after declaring they were gay and just wanted service, 1966, West Village, NY. Photo by Fred W. McDarrah/Getty Images. Dick Leitsch hosting a holiday party at his home in December 2017. Leitsch was undergoing treatment for cancer at the time; he discontinued treatment in January 2018 when he learned it was not working. He passed away in June 2018. Dick Leitsch celebrating St. Patrick’s Day at Julius’ Bar on March 17, 2018, New York, NY. Dick Leitsch visiting the memorial at the Stonewall Inn, March 20, 2018, New York, NY. 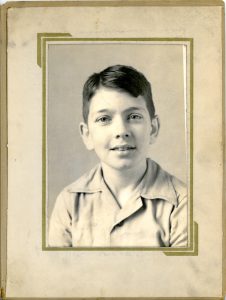 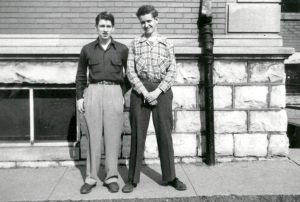 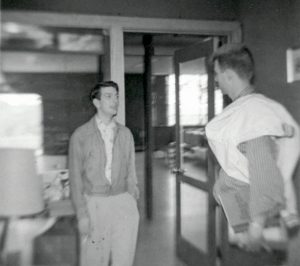 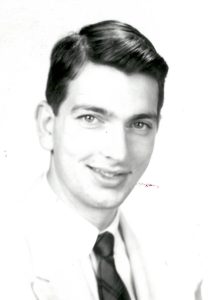 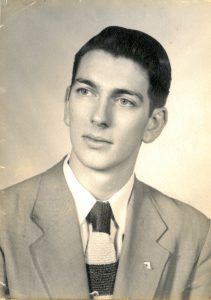 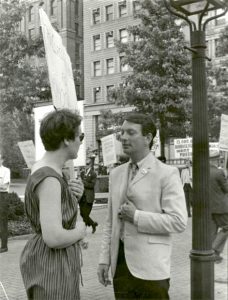 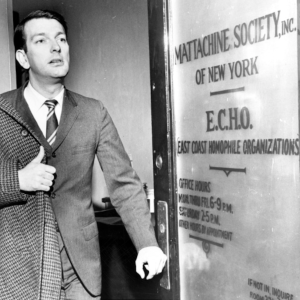 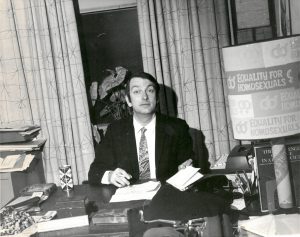 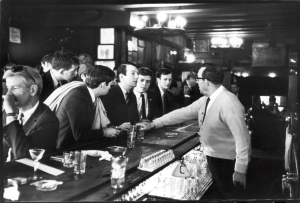 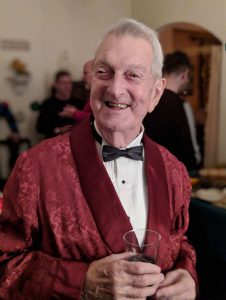 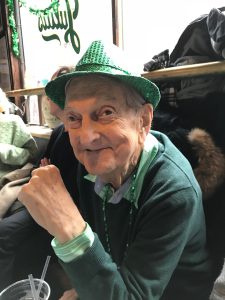 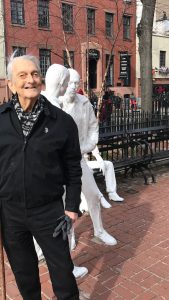