Advanced Search >
Thomas Mosmiller was born September 19th, 1947, in Baltimore, the youngest child in a traditional Irish-German Catholic immigrant family. Tom attended an all-boys Catholic high school, earned his bachelor’s degree from Mount Saint Mary’s College in Emmitsburg, MD, and entered a Jesuit seminary in Warnersville, Pennsylvania. But in the summer of 1970, Tom attended a community organizing training institute in Chicago that changed the trajectory of his life. For the first time, he realized he could fight for change and social justice outside the world of organized religion. He was on his way.
A few years later, Tom fell in love with a woman. She introduced Tom to feminism, helping him to realize how much he himself had been confined and oppressed by traditional attitudes about masculinity and maleness. Tom’s interest in men’s feminism led him to the Bay Area in 1976, where he got involved with the Berkeley Men’s Center, San Francisco gay politics, and a nationwide anti-sexist men’s movement working to redefine the meaning of masculinity. Within the men’s feminist movement, Tom came out and found acceptance as a bisexual man – whereas within the traditional gay community, his experiences ranged mostly from ridicule to rejection.
Tom subsequently helped found what became the National Organization for Men Against Sexism, and met sociologist Michael Kimmel. Together, they published the groundbreaking volume Against the Tide: Pro-Feminist Men in the United States, 1776-1990.
Around this time, AIDS began San Francisco. Tom took a job with the San Francisco Department of Public Health, coordinating one of the country’s first anonymous HIV antibody testing programs. From there, Tom moved over to San Francisco General Hospital, where he established an HIV counseling and testing program and secured funds for treating HIV+ substance abuse patients. In the late ‘90s, Tom turned his attention to issues of housing and homelessness in the minority HIV community. He served as coordinator for Alameda County’s Housing Opportunities for People With AIDS, and as a contract manager in Alameda County’s Office of AIDS Administration.
Tom doesn’t seem to have aged much since his seminary days. He’s soft spoken, with eyes that sparkle a bit as he talks. One might call him a quiet pioneer: a person who has endured pain, witnessed suffering, fought his fair share of battles, and is now enjoying a time of reflection and peace.
Tom Mosmiller posing with his father, Charles Augustus, Senior, in front of their home on Easter, 1954, Baltimore, MD. Tom Mosmiller posing with his mother, Mary Catherine Flahavan, at his graduation from Mount Saint Mary's College, 1969, Emmitsburg, MD. Group photo of a Feminist Bisexual household from Berkeley, Tom Mosmiller pictured on the far right, 1977, Yosemite, CA. Group photo of eight men on railings, Tom Mosmiller pictured in center, 1978. This photo was taken at the 1978 San Francisco Bay Area Planning Committee for the 1st California Men's Gathering of pro-feminist, gay affirmative, anti-racist men. Six white men on a fence, Tom Mosmiller pictured as the 4th man to the right, 1979. These men were members of the nationwide collective in 1979 that launched, produced and published M: gentle men for gender justice which became Changing Men: Issues in Sex, Gender and Politics in 1985. Tom Mosmiller dancing in green shorts having fun during the 9th National Men and Masculinity Conference, "Men Cooperating for A Change: New Roles, Responsibilities and Rewards - New Images and Ideals", 1983, Ann Arbor, MI. Tom Mosmiller holding Kathleen’s (former lover) son, Sean, at her home, 1985, New Jersey. Tom Mosmiller sitting at his desk as a San Francisco General Hospital Executive Staff, 1987, San Francisco, CA. Tom remarks: “I organized HIV/AIDS programs in the 1980s such as the Transfusion Risk Notification project to contact more than 10,000 transfusion recipients.” Tom Mosmiller at a podium delivering a keynote speech at the 14th National Men and Masculinity Conference titled “MENERGY: Celebrating the Pro-Feminist Men's Movement”, 1989, Pittsburgh, PA. His keynote speech was "Future History: Men's Movement Organizing in the '90s". Tom remarks: “My speech was based on research underway for Against the Tide, Pro-Feminist Men in the United States, 1776-1990, A Documentary History. Co-edited with Michael Kimmel, Boston: Beacon, 1992.” Tom Mosmiller sitting on a chair in the Oakland Hills for a wedding, 1991, Oakland, CA. Tom read an 1855 model pro-feminist wedding contract, "PROTEST" by Henry Brown Blackwell and Lucy Stone, discovered during research for Against The Tide. 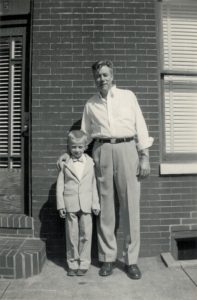 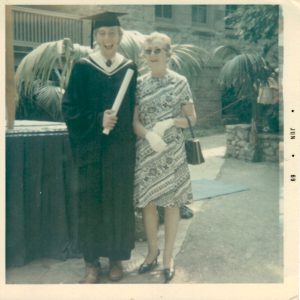 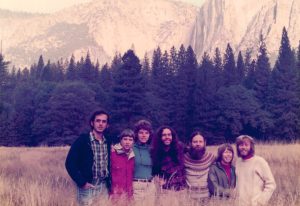 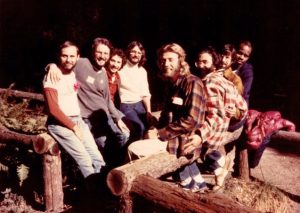 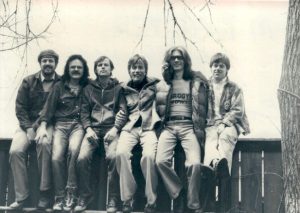 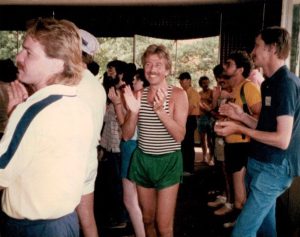 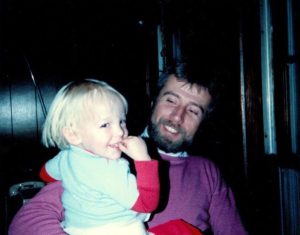 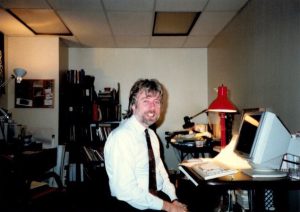 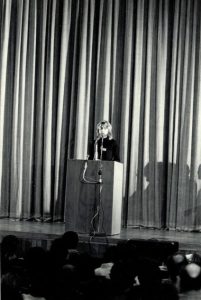 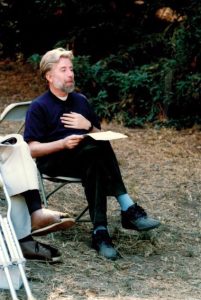