Advanced Search >
Michael Slingerland was born in 1950 in Greeley, Colorado. The youngest of three boys, Michael lost his mom when he was an infant. When Michael was eight, his father moved the family to Wylie, Texas. He dated boys throughout high school. At the same time, two gay friends took their own lives. Michael avoided that fate, though probably not by much.
After high school, Michael attended Texas Tech University, then worked internal affairs for the federal government for 37 years, eventually retiring in 2004. On the personal front, Michael met his first partner in his 20s through a personal ad in the back of a magazine. They lived in Irvine, Texas for 27 years. When they broke up, Michael ran a couple of businesses in the Dallas area.
After about ten years on his own, Michael met Chris Garlow, scion of a wealthy Pittsburgh family. Michael and Chris became business and life partners, investing in real estate and other ventures. Michael did the research and Chris came up with the money. In the midst of opening a bar, Chris was diagnosed with cancer and died two years later. A year later, Michael opened Garlow’s bar in Gun Barrel City, Texas.
Garlow’s was the second gay bar in Gun Barrel City. Initially, the police pushed Michael around and even arrested him for walking home drunk. Over time, the town adjusted, partly because Michael threw himself into local politics, serving on the town’s planning committee and economic development council. In May 2018, he ran for City Council and lost. He’s still decided whether to try again.
Gun Barrel City sits about 60 miles southeast of Dallas on Cedar Creek Lake, a popular weekend spot for both gay and straight folks from the big city. The town has a fistful of churches and fast food joints, and then there’s Garlow’s, a low-slung building with a dirt parking lot. That’s where OUTWORDS met Michael in June 2017 to record his story.
Michael’s a big, plain-spoken guy. He laughs a lot, but you can tell he’s battled his fair share of pain and loss. So we were happy to learn about his new relationship with a guy named Kevin. About six months later, Michael and Kevin got married. Thanks largely to Michael, even in honky tonk towns with names like Gun Barrel City, there’s room for love – no matter who’s doing the loving.
Michael Slingerland at his bar, Garlow's, 2017, Gun Barrel City, TX. Michael Slingerland at his bar, Garlow's, 2017, Gun Barrel City, TX. Michael Slingerland at his bar, Garlow's, 2017, Gun Barrel City, TX. 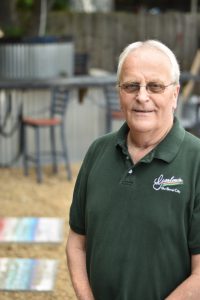 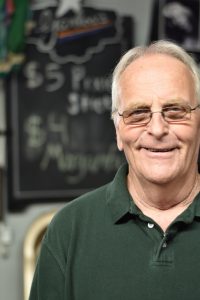