Advanced Search >
Kim Stacy was born in 1957 in Hyden, Kentucky. Her birth was attended to by caregivers from the Frontier Nurse program, who for more than 75 years have been delivering babies in hospitals and at home in the Appalachian Mountains (and who also helped bring Kim’s older siblings into the world). To this day, Kim is honored to support and contribute to this unique service agency.
Kim was raised in the mountains with her two brothers and four sisters. Her family (both immediate and extended) was close knit then, and still is. She says they were fortunate, because her father worked in the sawmill and then as a plumber and electrician, and never had to work in the coal mines. To this day, Kim loves the mountains, and its people.
With the passage of Title IX in 1972, Kim’s high school suddenly got a girls’ basketball team, and Kim became captain. This seemingly small accomplishment made Kim dream of playing college-level ball, and opened her horizons to the whole possibility of life beyond the mountains (which her parents encouraged). Kim eventually enrolled at Eastern Kentucky University in 1975. While she didn’t make the basketball team, she did start meeting other lesbians, and this too was life changing.
In 1978, Kim moved to Lexington, Kentucky. In an Urban League training program for women in nontraditional jobs, she learned trim carpentry, formed deep friendships, and began a 30-year stretch playing softball with the same group of women. In 1979, Kim moved to Monticello, a couple hours south of Lexington, where she built a house with her then-partner. Seven years later, Kim moved back to Lexington, where she met her future wife Anne Harrison.
In Lexington, Kim started her own company, called Custom Design Woodworking. She and Anne bought some land in Washington County, southwest of Lexington, where they built a home for themselves, and a workshop for Kim. Kim calls their little region “our slice of paradise”.
In 2005, Kim was diagnosed with breast cancer. At the time, her prognosis wasn’t good, but after surgery and chemo, it improved. Today, Kim’s still here, happily building, contracting, and making furniture and cabinets. In 2016, her marriage to Anne got written up in the Washington Post, highlighting the fact that some county clerks in rural Kentucky, no matter what their personal beliefs, respected the Supreme Court’s marriage equality decision as “the law of the land”.
All too often these days, America gets rigidly divided into ‘red’ and ‘blue’ states. Kim’s story reminds us that America from the sky may look one way – but on the ground, there’s a different, more hopeful story.
Kim Stacy (age 17 and placed fifth from the left in the back row) as captain of her high school basketball team, Leslie County, KY, 1974. A high school graduation portrait of Kim Stacy (age 18), Hyden, KY, 1975. Kim (age 20) as a lifeguard in Lexington, KY, 1977. Kim (age 24) working in timber frame construction in Monticello, KY, 1981. Kim Stacy (age 32) with her parents and siblings, 1989. Kim (age 32) building her house in Willisburg, KY, 1989. Kim Stacy, post-chemo treatment for breast cancer, with her future wife Anne Harrison, Edisto Beach, SC, 2005. Kim Stacy (placed on the far left in the back row) with her softball team, Custom Designed, in green shirts and the Taiwanese softball team in blue shirts at the Gay Games, Chicago, IL, 2006. Kim Stacy (placed in the first row in an orange shirt) with her softball team, Custom Designed, at the Gay Games, Chicago, IL 2006. Kim Stacy (age 51) as owner of Custom Designed Woodworking in Willisburg, Kentucky, 2008. Here she stands in her shop next to her furniture. Kim Stacy (age 58) with her wife Anne Harrison at their marriage ceremony, July 16, 2015. 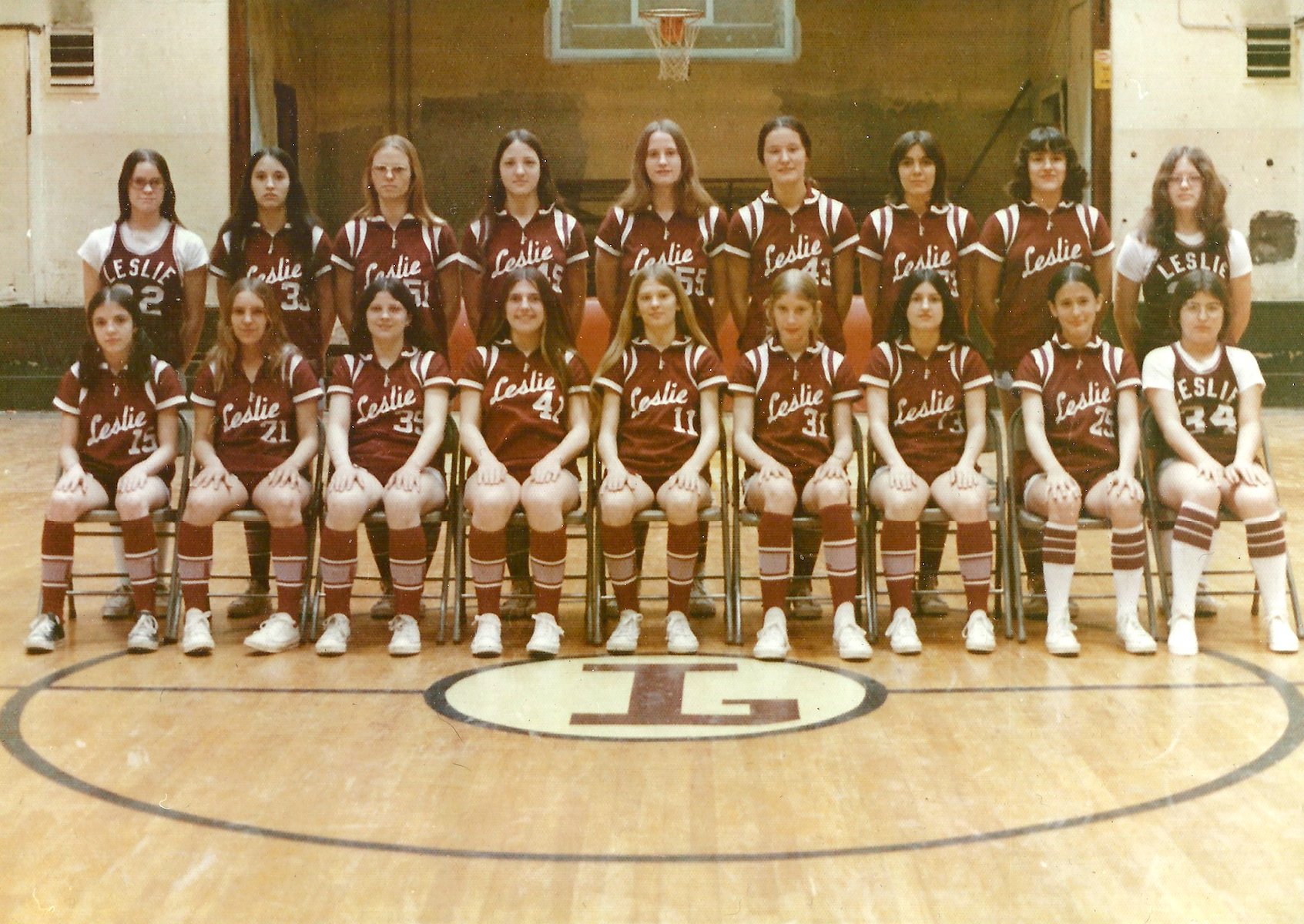 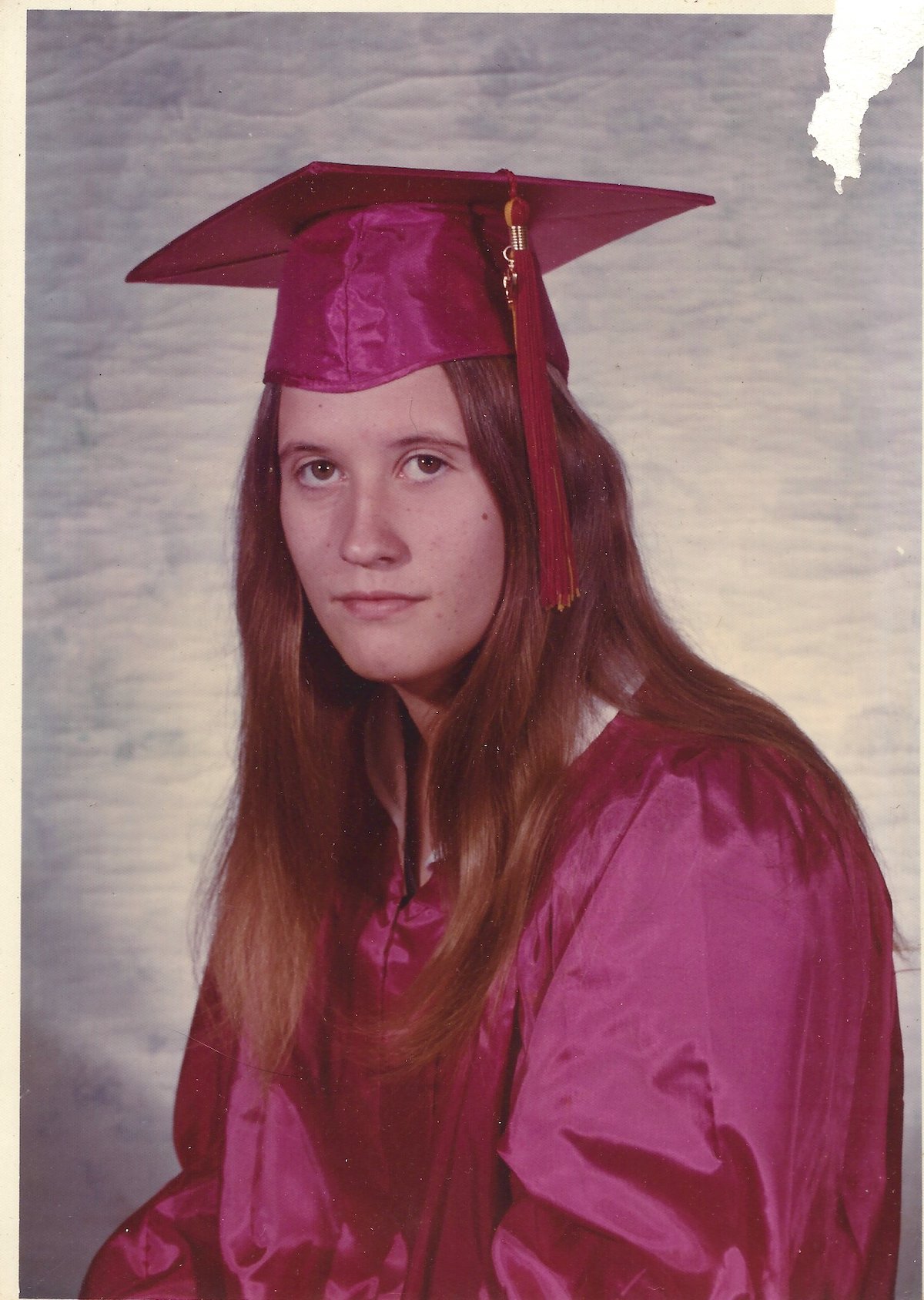 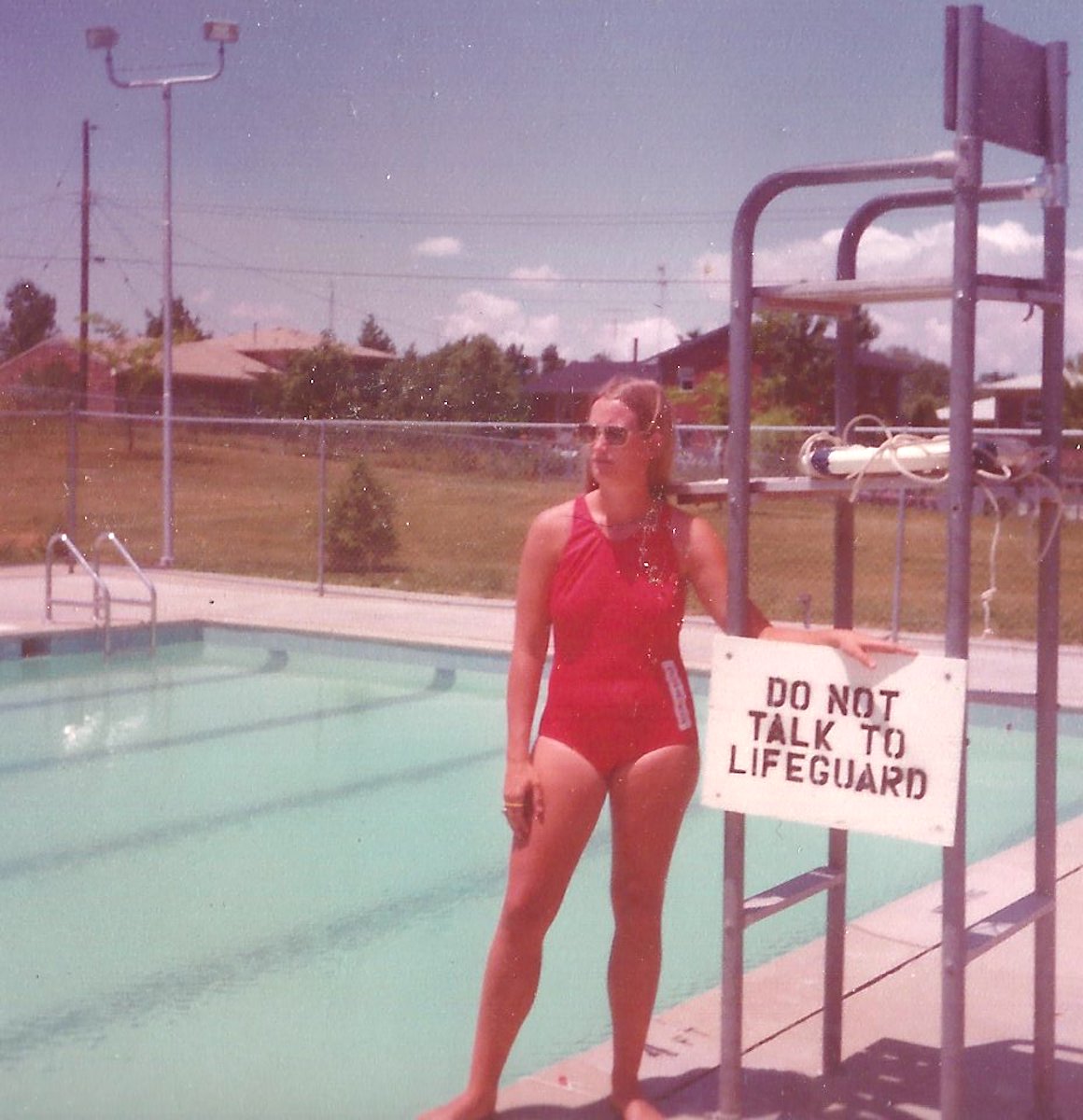 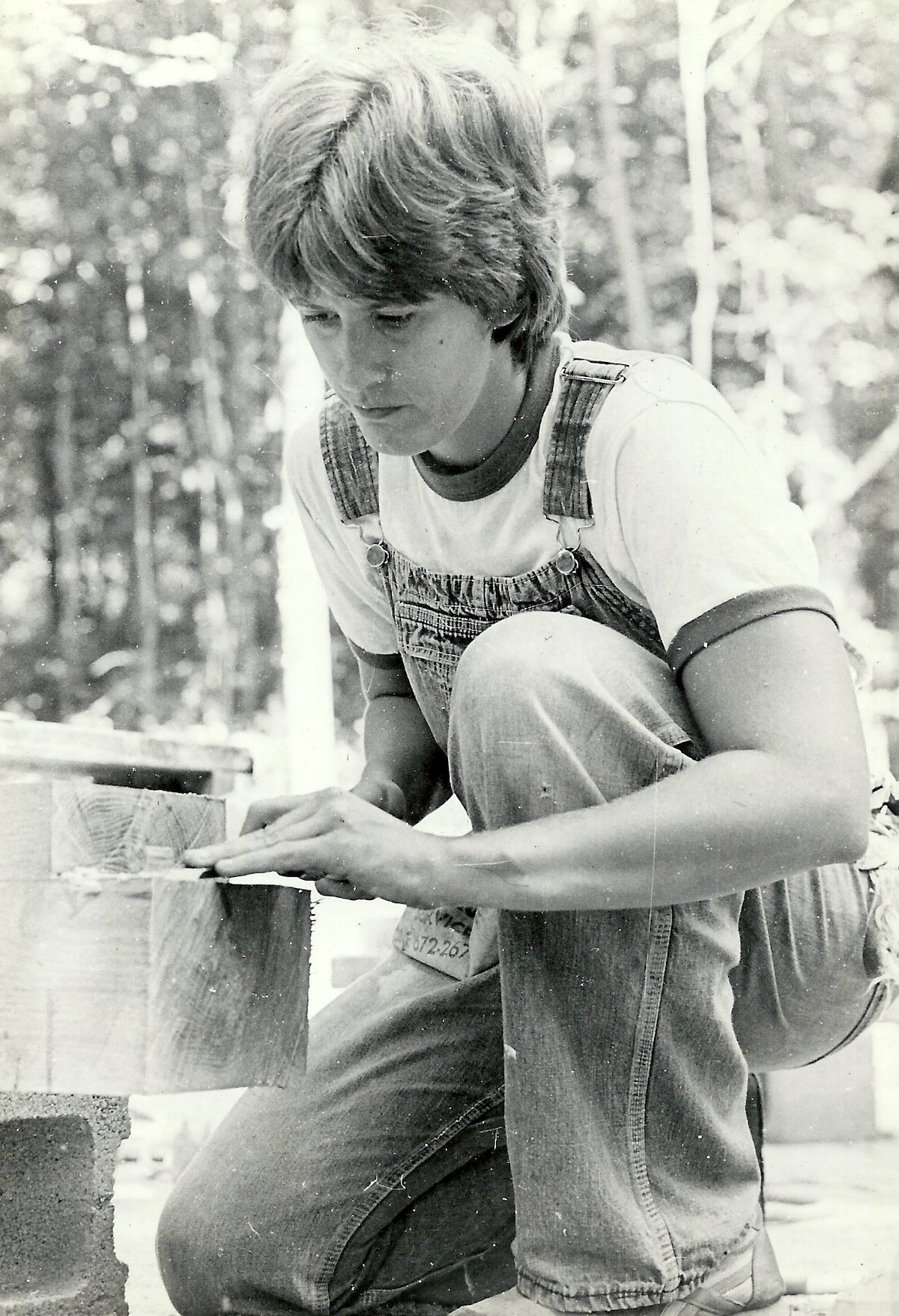 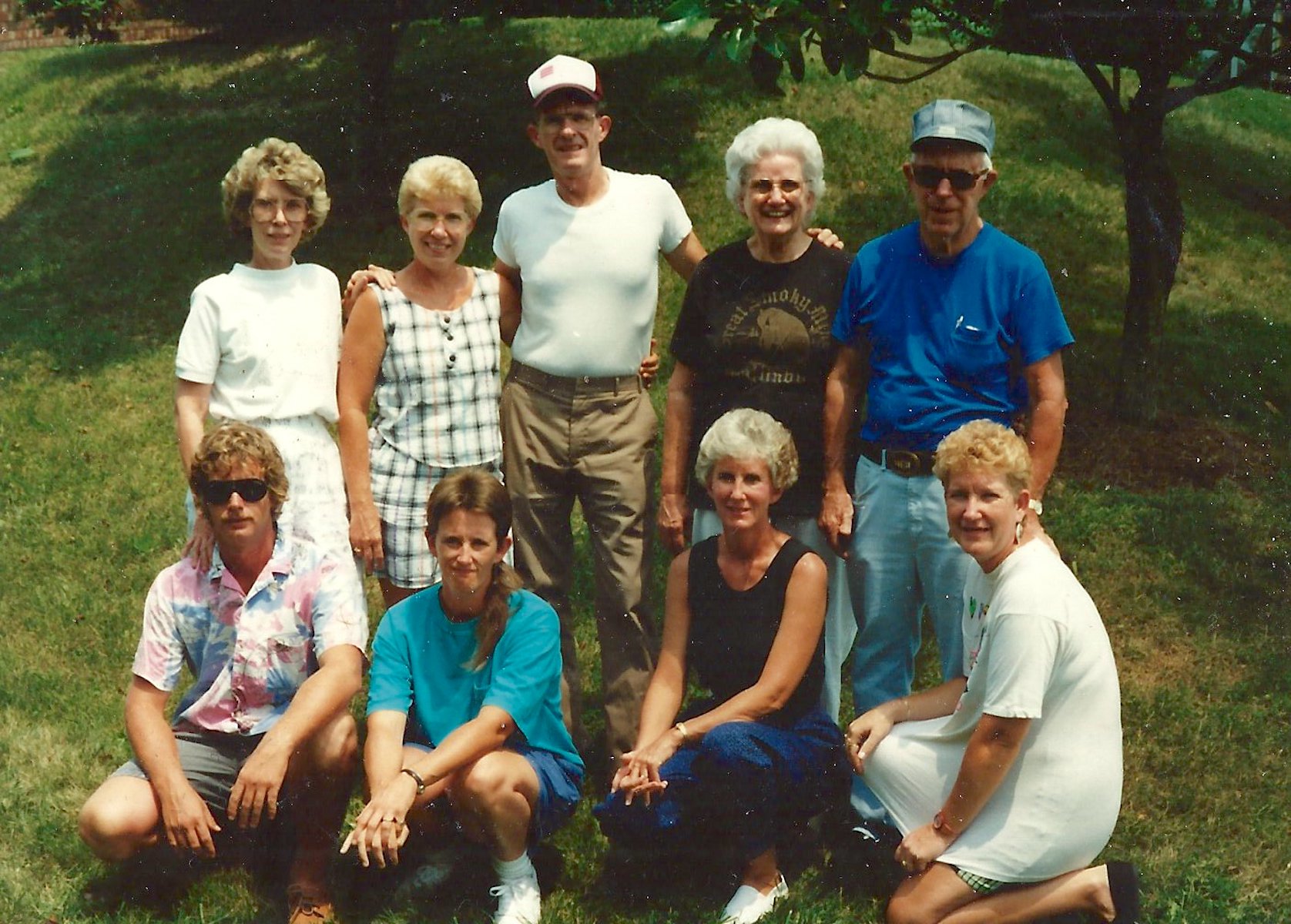 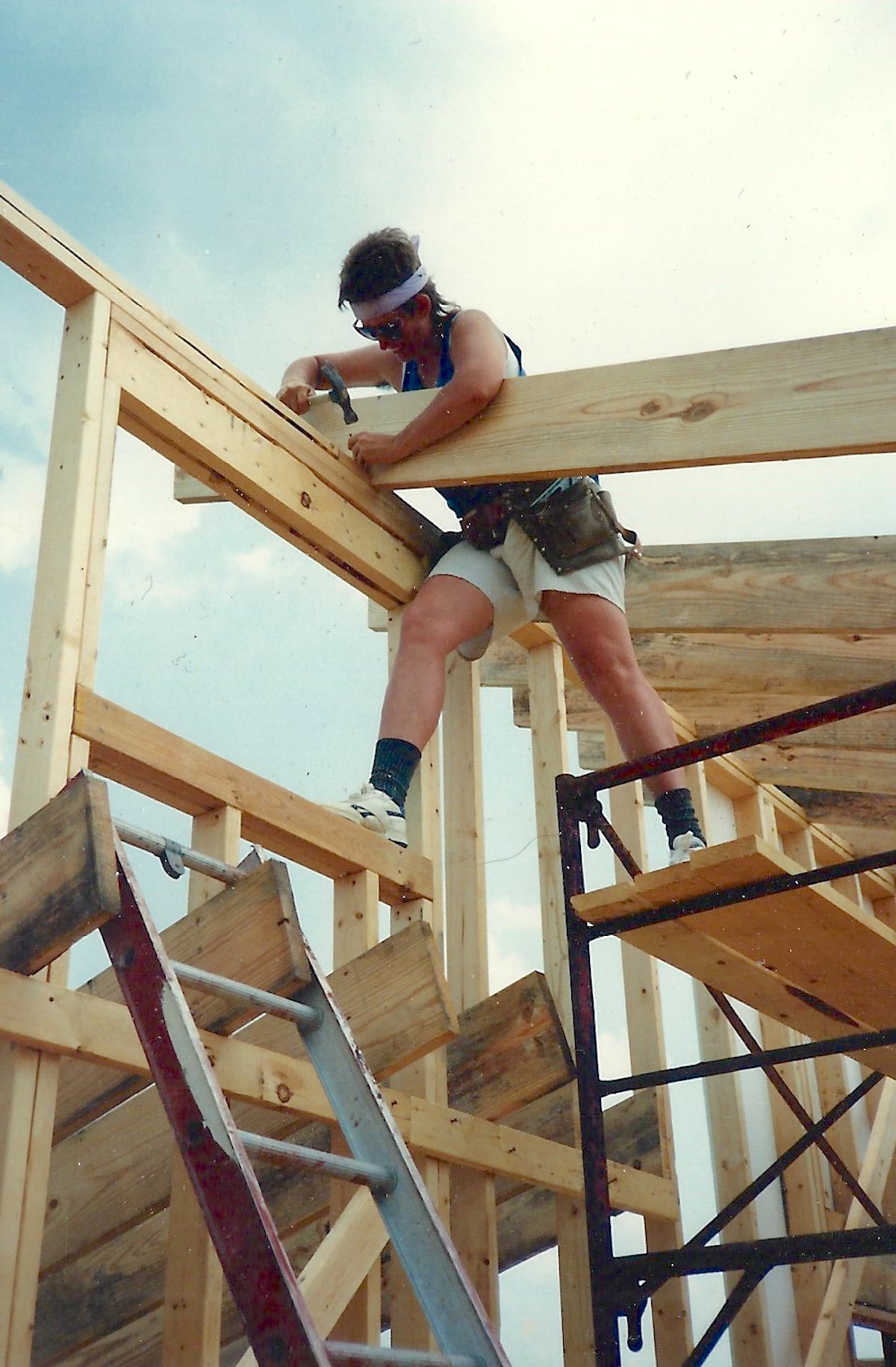 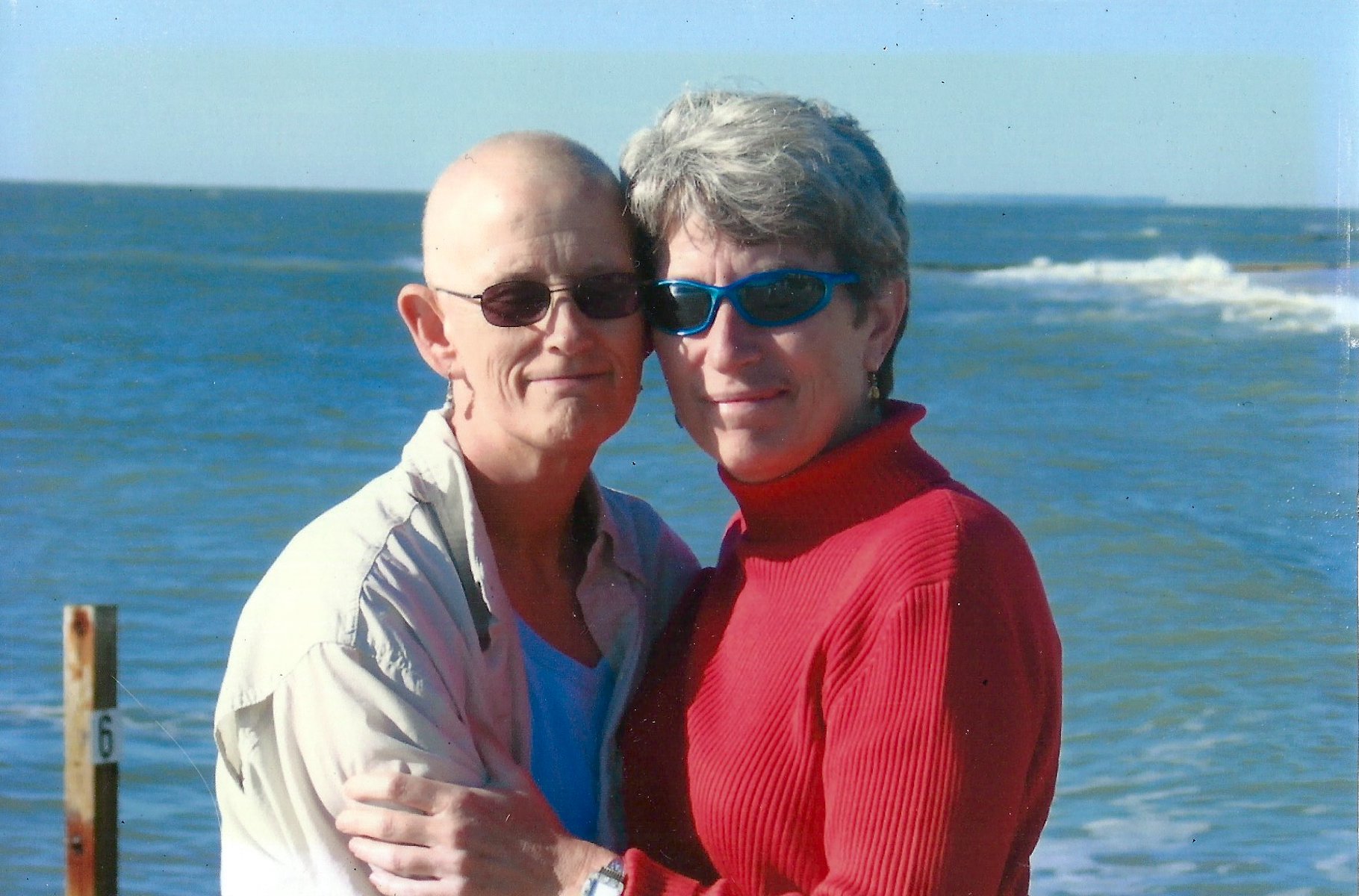 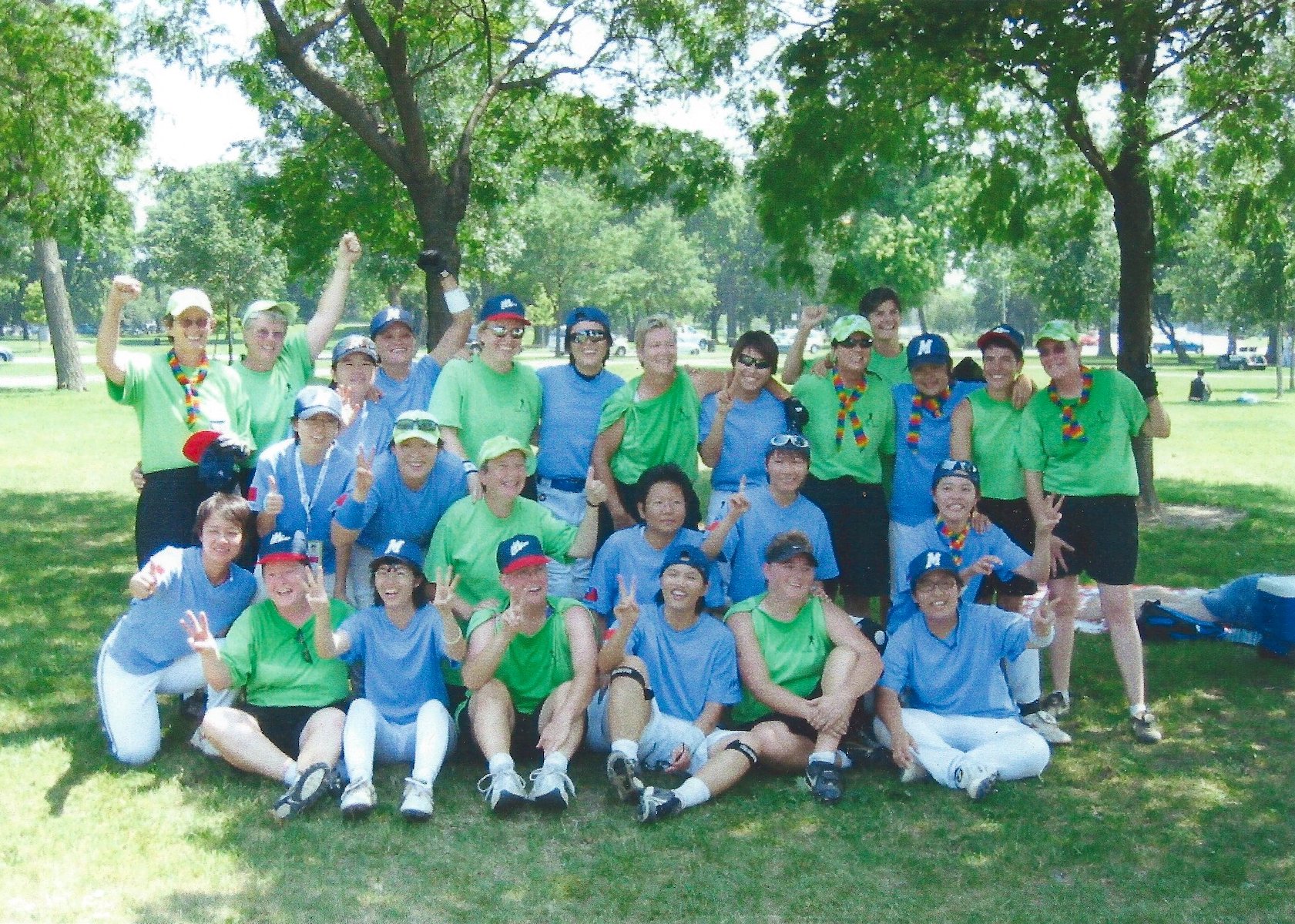 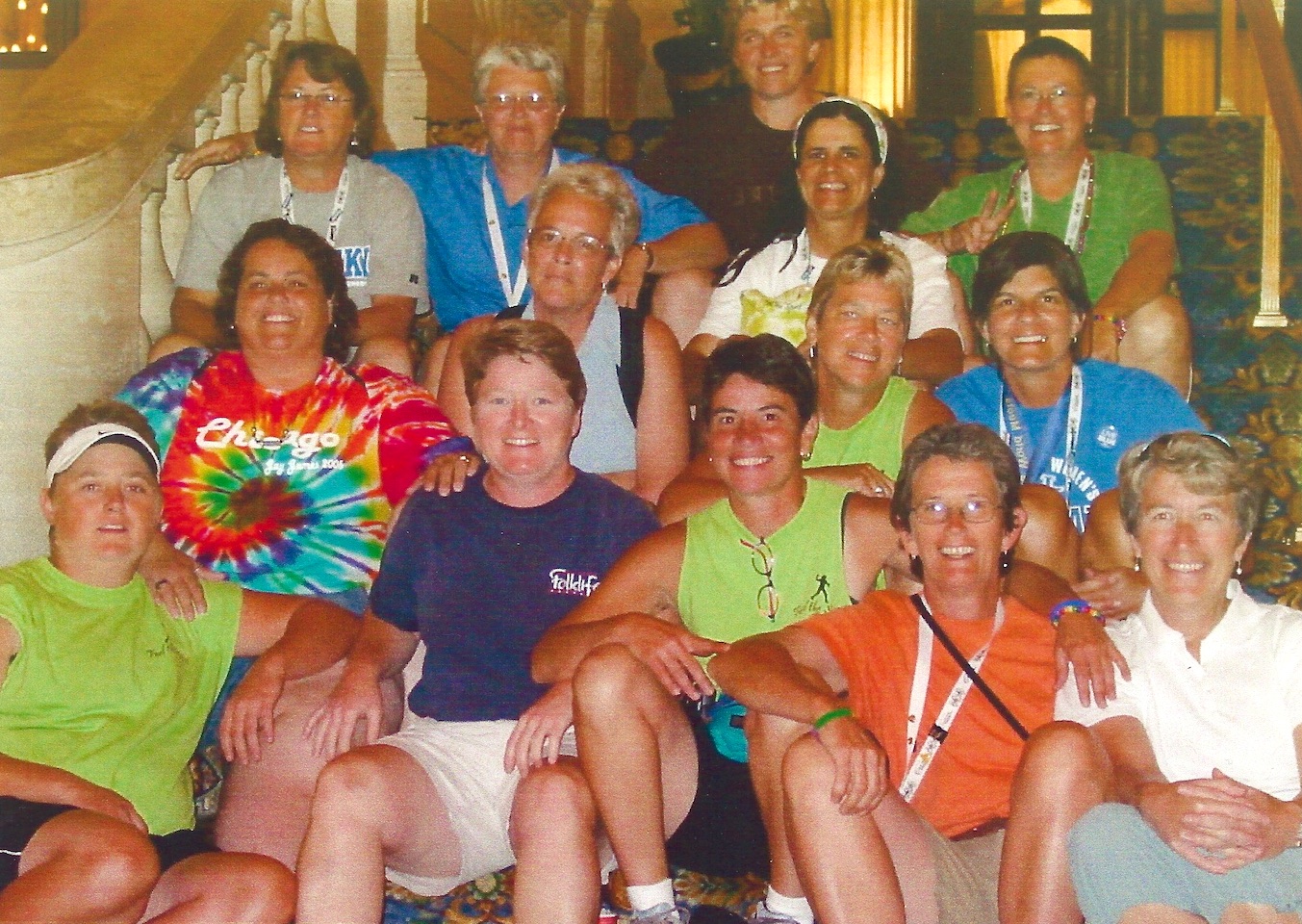 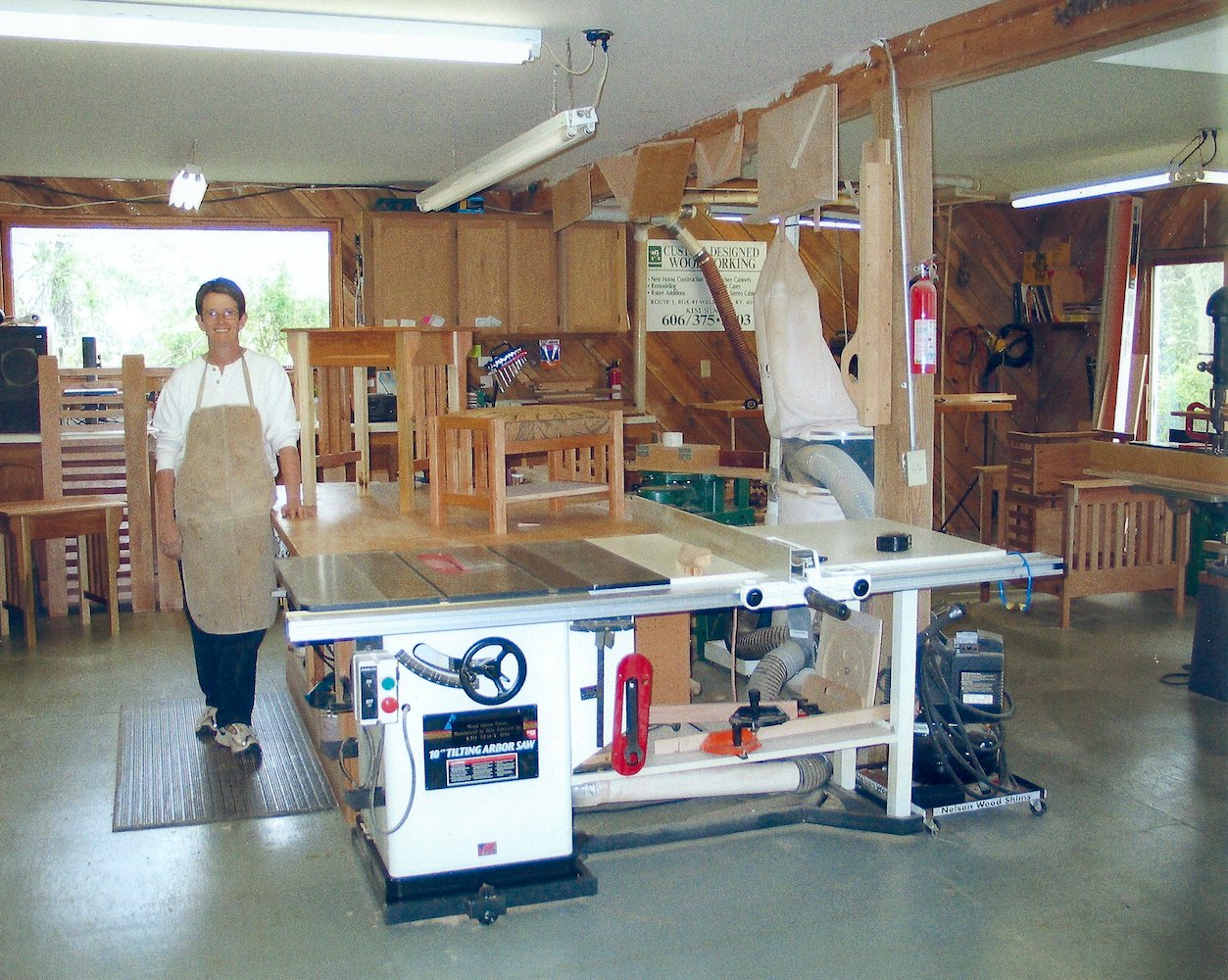 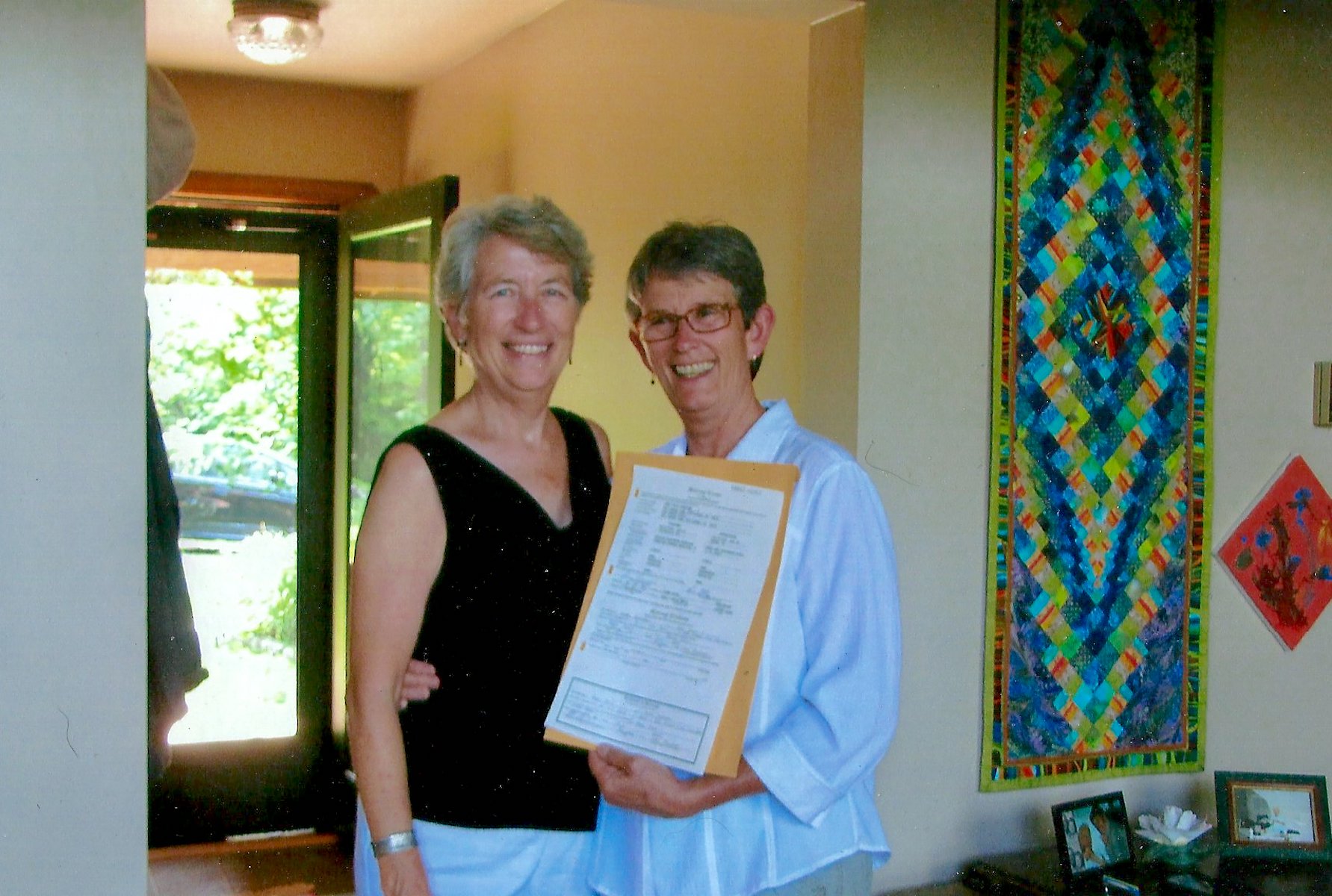