Advanced Search >
Kitty Tsui was born in Hong Kong in 1952 and spent her childhood there and in London before moving with her family to San Francisco in 1968.
Kitty got her first writing byline as a young teen in the South China Morning Post. Her activism also began young. At 17 years old, she made the decision to attend San Francisco State instead of the more overtly prestigious UC Berkeley after watching students there go toe-to-toe with mounted cops in their battle for an ethnic studies department. While studying creative writing at SF State, Kitty established the Third World Poetry Series featuring poets like Roberto Vargas, Victor Hernandez Cruz, and Jessica Hagedorn, and studied with feminist and activist Sally Gearhart. It was around that time that Kitty came out as a lesbian.
In 1981, Kitty was a founding member of Unbound Feet, a female performance group challenging stereotypes about Asian women. It was widely recognized as a catalyst for the Asian-Pacific Islander feminist and lesbian movements in San Francisco.
In 1983, Kitty published her first book of poetry and prose, The Words of a Woman Who Breathes Fire. It was the first book ever published by a Chinese-American lesbian. Kitty’s second book, Breathless: Erotica came out in 1996 and won a Firecracker Alternative Book Award. Her third book, Sparks Fly, was written by her alter ego Eric Norton, a gay leatherman living in pre-AIDS San Francisco.
Kitty has also been a bodybuilder. In 1986, she won a bronze medal for women’s physique at the second Gay Games, held in San Francisco. Four years later, at the Gay Games in Vancouver, she brought home the gold medal at the age of 38. Bringing together her physical and literary prowess, Kitty became the first Asian-American woman to appear on the cover of the lesbian erotica magazine On Our Backs.
Through the years, Kitty’s poetry and prose has been collected in dozens of anthologies. In 2016, she received the Phoenix Award for Lifetime Achievement from the Asian Pacific Islander Queer Women and Transgender Community.
Today, Kitty lives in Long Beach, California with her German shorthaired pointer Beaux. We had to schedule her OUTWORDS interview in April 2017 around the Long Beach Grand Prix, which roars past her windows every spring. Fortunately, the rest of the time, the neighborhood is quiet, a good place for an introspective poet who has relentlessly redefined what Chinese women do and don’t do.
Kitty Tsui’s grandmother, actress Kwan Ying Lin, onstage for the first time in Chinatown, San Francisco CA, 1923. Kitty Tsui’s grandmother Kwan Ying Lin (on right) with her roommate and close friend, Hsu Hung Lum (on left) and Hsu’s daughter in the middle, circa 1940s. Photo credit: Thomas Chan. Photo courtesy of Kitty Tsui. Kitty the arms of her grandmother, poa poa, Hong Kong, circa 1954. Kitty’s grandmother, Kwan Ying Lin, onstage for the last time at the age of sixty-nine during six special benefit performances, all sold-out, her director and cast members in the wings, musicians and stage hands behind the orchestra on the left, all straining to see her perform, San Francisco, CA, 1969. Kitty in her grandmother poa poa’s studio apartment in Chinatown, San Francisco, 1977. Photo credit: Raisa Fastman. Photo courtesy of Kitty Tsui. Kitty and the members of Unbound Feet, a female performance group challenging stereotypes about Asian women, founded in 1981. Kitty’s first book of poetry and prose, "The Words of a Woman Who Breathes Fire," was published in 1983. Kitty onstage at Gay Games II for her bronze medal winning performance at the Civic Center, San Francisco. 1986. Onstage at Gay Games II, San Francisco. 1986. Kitty at her water tower home with her first Vizsla, Meggie Senior, San Pablo, California, 1988. Photo credit: Robert Giard. 1988. Photo courtesy of Kitty Tsui. Photo shoot for the cover of the lesbian magazine On Our Backs, San Francisco, 1988. Photo credit: Jill Posener. Photo courtesy of Kitty Tsui. Kitty with Mister Marcus, Bay Area Reporter columnist who covered the leather scene, at the Eagle, San Francisco, 1989. Kitty wrote the first leather column in the Midwest for Chicago Outlines/Nightlines called “Leather Talk: Top to Bottom.” Kitty, San Francisco. 1991. “Love my flattop. Love my leathers!” Photo credit: Richard Law. Photo courtesy of Kitty Tsui. Kitty with Corinne Lee, co-chair of the Gay Games III softball committee, Vancouver, 1990. Kitty won a gold medal for women’s physique at the Gay Games III, Vancouver, 1990. Kitty Tsui marching on the frontline with AIDS and POC activists, and others including Colonel Margarethe Cammermeyer, Cybil Shepherd, Harry Hayes, Cleve Jones, and Jewelle Gomez at the 1993 March on Washington for Lesbian, Gay, and Bi Equal Rights and Liberation, Washington, D.C. 1993. Kitty shares, “The Reverend Jesse Jackson barged (yes, literally!) into the frontline when we marched by the White House where he and his bodyguards had been waiting. (So, no, he had not been marching with us. It was a photo op.)” Kitty reading from “Sinister Wisdom,” at the Take Four Café, Oakland, 2014. Photo credit: Cathy Cade. Photo courtesy of Kitty Tsui. Kitty next to a stack of anthologies in which she is included, with her three books in the foreground, Long Beach, California, 2016. Photo credit: Jennifer Abod. Photo courtesy of Kitty Tsui. Kitty Tsui with Alice Y. Hom upon receiving the 2016 Phoenix Award for Lifetime Achievement from APIQWTC, Asian Pacific Islander Queer Women & Transgender Community, the largest organization of API queer women and transgender folk in the country. Kitty with her mother at the exhibit, Feminists to Feministas, with three of her silkscreens on exhibit (on the wall behind them) at the GLBT Historical Society, San Francisco, 2016. Photo credit: Jennifer Abod. Photo courtesy of Kitty Tsui. 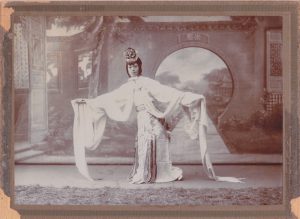 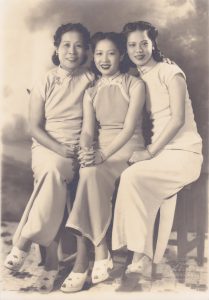 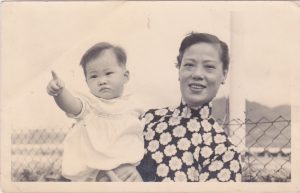 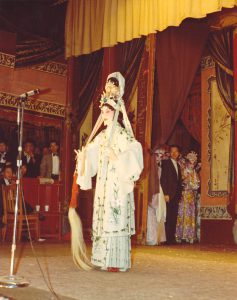 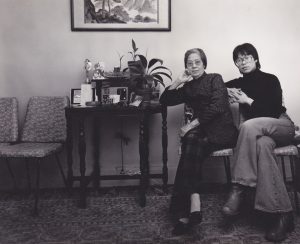 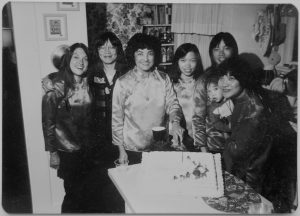 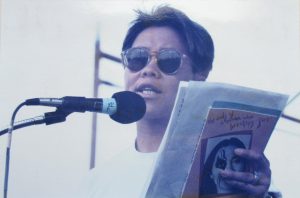 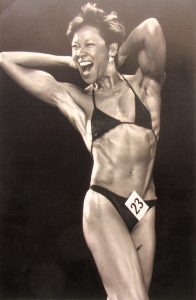 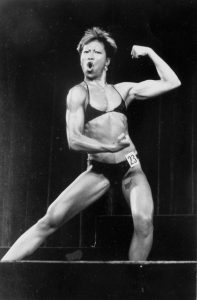 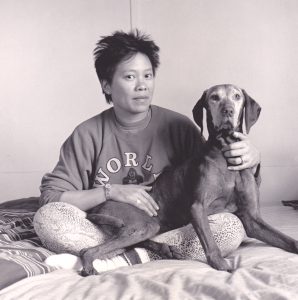 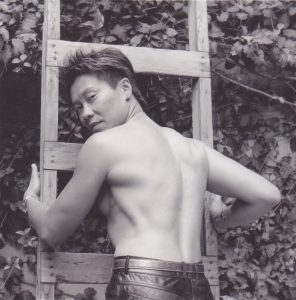 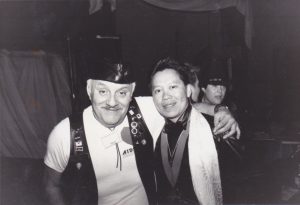 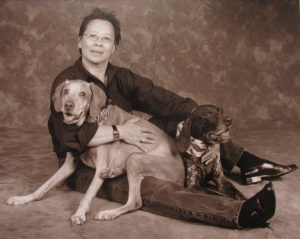 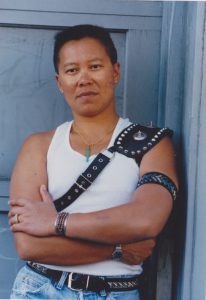 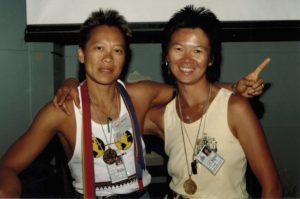 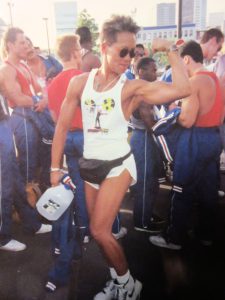 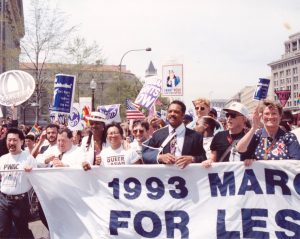 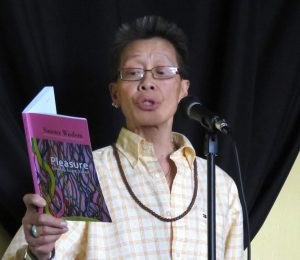 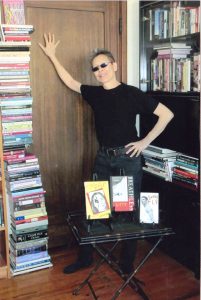 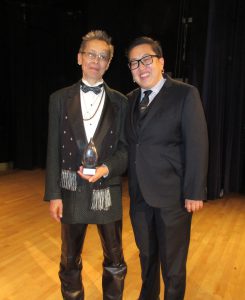 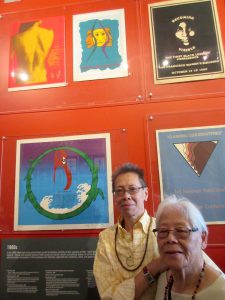