Bruce Vilanch was born in 1948 in New York City, and raised by his adoptive parents Jonas and Henne in Paterson, New Jersey. He developed an early passion for acting and was a child model for Lane Bryant. After high school, he studied theater and journalism at Ohio State University.

Post-college, Bruce joined the staff of the Chicago Tribune in 1974, covering youth culture. Through this job, he met Bette Midler, who asked him to write some jokes for her. He went on to co-write several entire shows for Bette from Divine Madness (1980) to The Show Must Go On (2008). In between, Bruce wrote for Bette’s TV show as well as The Brady Bunch Variety Hour and Donny and Marie, and helped veteran funnyman Paul Lynde develop jokes for his unforgettable role on Hollywood Squares.

In 1989, Bruce wrote material for the Academy Awards, scoring consecutive Emmy Awards in 1991 and 1992 for his efforts. In the 1990s, he was hired to help launch a new version of Hollywood Squares. Starting off as the series’ head writer, Bruce subsequently went on-camera ‘next door’ to Whoopi Goldberg. Overnight, Bruce became a phenom in his own right, breaking new ground as one of the first openly and uproariously gay comics on TV. To crown his comedic career, Bruce performed the role of Edna Turnblad in the 2004 Broadway production of Hairspray, reprising the role played in the 1988 film by Divine.

In addition to his acting and writing work, Bruce has served on the honorary board of Aid for AIDS, and hosted and appeared at countless AIDS fundraisers. He also wrote and hosted a fundraiser for the Los Angeles charity Pets Are Wonderful Support (PAWS), which helps people living with HIV/AIDS to care for their pets. In 1997, Bruce received GLAAD’s Stephen F. Kolzak Award for his outsized presence and charisma in support of the LGBTQ community.

On the day of Bruce’s interview, OUTWORDS had one question (besides all of the other questions we typically ask our subjects): what t-shirt would Bruce wear? The correct answer was a black t-shirt with ‘VERA CHARLES in MIDSUMMER MADNESS’ emblazoned on the front – a reference to Auntie Mame, possibly the most iconic queer film of all time. Bruce was, of course, funny – but he was also tender-hearted and fierce. We laughed, we cried, and we were inspired.
Bruce Vilanch's bar mitzvah photo. Bruce and Bette Midler. Bruce and Bette Midler in 2007. 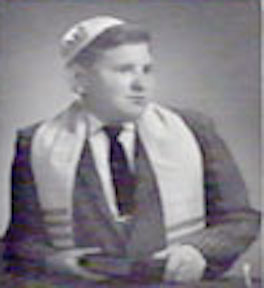 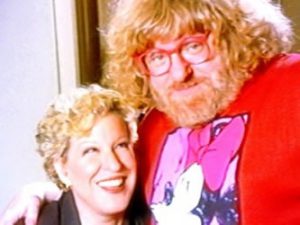 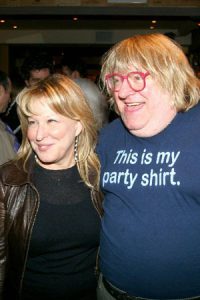