Dick Wagner was born in 1943 in Dayton, Ohio into a traditional German Catholic family (his great grandparents ran a successful beer brewery). Dick attended the University of Dayton, where he served on the student council and organized civil rights demonstrations, then headed to the University of Wisconsin Madison for his MA and PhD in American history. While researching his dissertation in the library, he stumbled across books on homosexuality. It was the first explicit acknowledgement he’d witnessed that he wasn’t the only queer in the world.

In 1974, Dick mounted a run for the Madison City Council, campaigning on the need for an ordinance to prohibit discrimination on the basis of sexual orientation. Dick lost that race. But after Harvey Milk’s assassination in 1978, Dick heard Milk’s recorded will (“to be read aloud in the event of my assassination”) on the radio, urging gay men to come out. Inspired by the fallen leader’s words, Dick campaigned in 1980 as an openly gay man for the Dane County Board of Supervisors, and won. He served on the board for fourteen years, including four years as chair.

In 1983, Wisconsin Governor Tony Earl asked Dick and his board colleague Kathleen Nichols, an out lesbian activist, to co-chair the Governor’s Council on Lesbian and Gay Issues – the first official, state-level council in the US to include the words ‘lesbian’ and ‘gay’. In 1985, Dick was a founding member of the National Association of Out Officials. In later years, he served on the board of Madison AIDS Support Network and chaired Madison’s Urban Design Commission.

Keenly aware that most LGBTQ history focused on big cities and the distant East and West coasts, Dick set out to document Wisconsin’s unique queer history – for example, the fact that Wisconsin is the only state to have elected three openly gay people to Congress – and affirm the importance of Midwest LGBTQ activism. Now retired from politics, Dick is hard at work on a book that will comprehensively document Wisconsin queer history from before Stonewall through the 20th Century.

Inviting OUTWORDS to interview him in March 2018, Dick wrote, “My home in Madison is an 1857 landmark house, and has a long gay history going back to the 1940s. Good spirits hover.” Our experience bore out Dick’s description. Outside Dick’s windows was a frozen, snow-covered lake. Inside, Dick is making sure that Wisconsin’s unique LGBTQ history is seen, known and appreciated by all.

Dick Wagner (left) speaks to Gov. Pat Lucey about historic structures during Wisconsin's first observance of Historic Preservation Week in 1974. A historian, Dick Wagner was director of the Wisconsin American Revolution Bicentennial Commission and led the Wisconsin ceremonies at the State Capitol in 1976. As coordinator of the Wisconsin Executive Residence, Dick Wagner ran the Governor's Mansion for Gov. Martin Schreiber in 1977. Dick Wagner poses in the kitchen for a feature newspaper article on his historic preservation work. Dick fixes up and lives in a house originally built in 1874 — one of four 19th century houses on the neighborhood block that he has worked on. 19. Dick Wagner with Gov. Earl in 1983 at signing of Consenting Adults Bill decriminalizing homosexuality. Dick Wagner is appointed by Gov. Earl to Co-Chair the Governor's Council on Lesbian and Gay Issues, 1980s. Dick Wagner (left) witnesses Gov. Earl signing an AIDS Awareness Proclamation in 1984 when President Reagan had not yet spoken on AIDS. Dick Wagner rides in a convertible in the Madison Gay Pride Parade with Supervisor Earl Bricker, a fellow member of the Dane County Board, late 1980s, Madison, WI. Dick Wagner (left) with five out local officials with the George Segal Gay's Liberation sculpture in Madison's Orton Park, where it rested until New York was ready to put it in Sheridan Square. Madison, WI. Dick Wagner among friends on his house stoop (holding fan) for a Labor Day party. Dick Wagner on his front stoop with a young Mike Verveer. Mike has been a long-serving member of the Madison City Council and was one of the younger folks Dick was able to mentor. Dick Wagner celebrating Halloween. Dick Wagner (second from right) with (L-R) Congress members Barney Frank, Tammy Baldwin, and Tom Barrett at a fundraiser in Dick’s backyard. 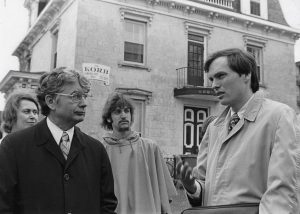 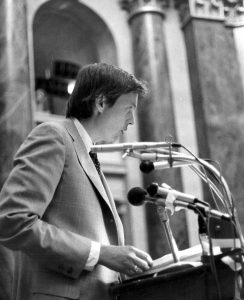 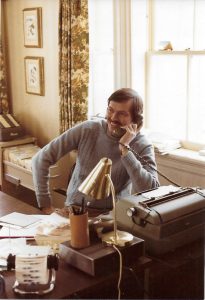 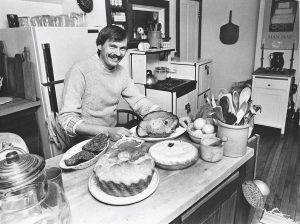 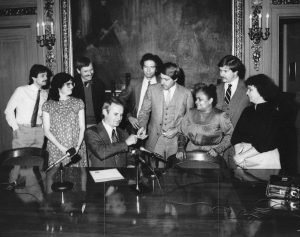 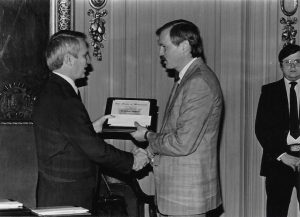 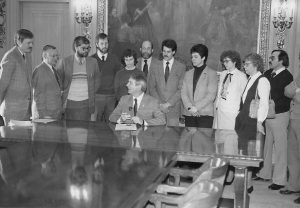 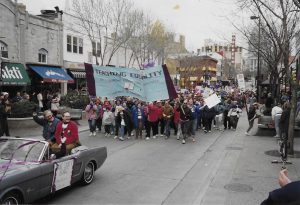 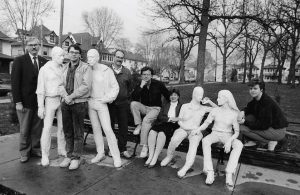 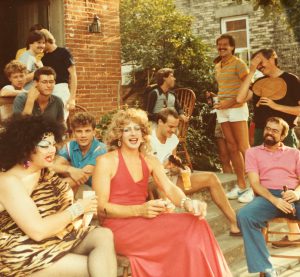 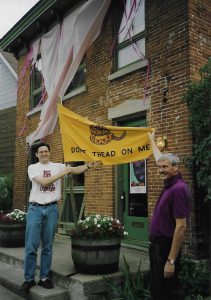 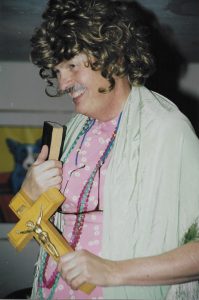 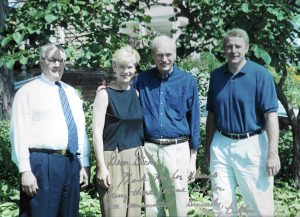